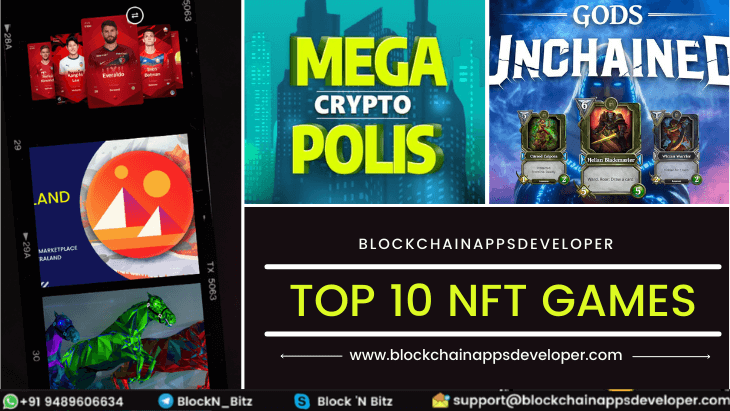 Here the Blockchain & NFT Blog covers the top and popular 10 NFT games in 2021 which are in hype right now. Explore the blog to know more about it.

Blockchain and NFTs have been hype as the next popular and big thing for the gaming industry.

NFTs are beyond the limit of inflated expectations, climbing up the slope of enlightenment and trough of disillusionment in digital art and digital collectibles

NFTs eanble game player requirements of separate fandom, ownership, huge collection, and profit-based investment, developing them a compelling fit to be applied as a latest technology to gaming platform

Axie Infinity is one of the most demand and popular NFT games in recent days. Axie Infinity is a battling and trading game platform that allows participants to raise, collect, breed, trade, and battle creatures called Axies.

Axie Infinity is a blockchain-based play-to-earn NFT game, gained 1 million game players in August from just 30,000 game players in April 2021 year. The Axie infity game that rewards game players in cryptocurrency or digital currencies is said to be coming to the rescue of particular unemployed people in creating countries such as Brazil, Venezuela and Philippines.

If you want to develop and launch a blockchain-powered NFT gaming platform like Axie Infinity?

Splinterlands is similar in game concept like Magic the Gathering and Hearthstone where you create up a digital collection of cards, which all have different stats and abilities, and use them to battle other users in skill-based gaming matches. By using advanced methodologies and blockchain technology, game players can buy, sell, and trade their digital collectibles and assets freely just as if they were physical cards, and whole the transactions are recorded immutably.

If you want to build and launch blockchain-powered NFT gaming platform like Splinterlands?

NBA Top Shots, the 2nd-biggest NFT marketplace, that will sell amazing moments from Summer League basketball games in Las Vegas. NBA Top Shots will be the 1st time the gaming platform has created NFTs of great plays of games that fans have seen in person. Most popular sports teams are turning to NFTs as the best and innovative way to generate more revenue from their fanbase.

If you want to build and launch a blockchain-powered NFT gaming platform like NBA Top Shots?

Decentraland is the first established and fastest-growing role-playing metaverse built on the Ethereum blockchain network. You can create your applications and scenes, explore other crypto users' gaming environments, and even crypto trade some of your properties to get huge profits. Decentraland is a virtual reality gaming platform that permits users to generate, participate in, and monetize apps and content. It was developed in 2016 by founders Ariel Meilich & Esteban Ordano.

Gods Unchained is a NFT based virtual collectible gaming platform that executes on the Ethereum blockchain network. Gods Unchained was conceived and launched by a gaming startup – publically and Immutably. Actually, Gods Unchained is virtual card trading game that assists game players to mint, own, buy, and sell the virtual cards. In addition to that, there is no registration/membership fee, and the NFT gaming platform is completely free for the gamers while additional in-game item purchases are available.

Right from its launch, $7 million worth of crypto transaction has occurred as an outcome of crypto exchanging virtual cards and plethora of tournaments has been establized with a game reward pool of $570,000.

CryptoKitties is a blockchain powered Ethereum NFT game developed by Canadian studio Dapper Labs that permits game players to buy, sell, collect and breed virtual cats. It is one of the earliest attempts to deploy advanced methodologies and blockchain technology for recreation and leisure purpose

Zed Run is a new blockchain-based NFT gaming platform that lets you own and race digital or virtual racehorses. You can Buy, breed, race a NASCAR digital horse as an NFT. All transactions are in Ethereum blockchain network, and all money earned is real. NASCAR links partnership with the startup behind a blockchain powered NFT based ZED RUN - digital horse racing game.

The fantasy football game Sorare is entirly various to the other trading gameplay. Sorare is operated on the Blockchain network, which means there is a 100% transperancy of each single transaction on the web. Sorare fantasy soccer game gives real digital ownership, buy, sell, and trade cards with other online users.

Want To Build NFT Marketplace For Football Game like Sorare on ETH Blockchain?

Explore the blog to know more about Sorare Clone Script

CryptoBlades provide a fun and profitable experience for game players, to develop a healthy and excited community around blockchain gaming industry, and develop an ecosystem of Play-To-Earn systems to meet the requirements and needs of all NFT gamers from around the world. CryptoBlades is a binance smart chain powered NFT gaming platform that utilizes a Play-to-Earn model by distributing SKILL via  gameplay, and providing significant value to player NFTs by improving their use through future gaming features.

If you’re wondering how to build NFT gaming platform like CryptoBlades?

MegaCryptoPolis is a Decentralized City Builder dApp Game Runs on Ethereum and TRON blockchain networks. MegaCryptoPolis is a decentralized online multiplayer based strategy game, with whole game transactions verified by smart contracts and game player activities stored within the Ethereum blockchain network. This MegaCryptoPolis game allows the game participants and players to rent buildings, create new generations of citizens, offer services to other players, produce materials those are required by other buildings, place ads and drive cars etc.

From our top10 list, you will notice that NFT games adopt popular gaming classification, even though in combination with blockchain and NFT elements, certain ideal business models for establishing rarity and uniqueness. As such, NFT game players or users are not all that difficult to play. They are enjoyable to the core and highly rewarding, as in the case of Axie Infinity NFT game, where some game users are able to get a reasonable income.