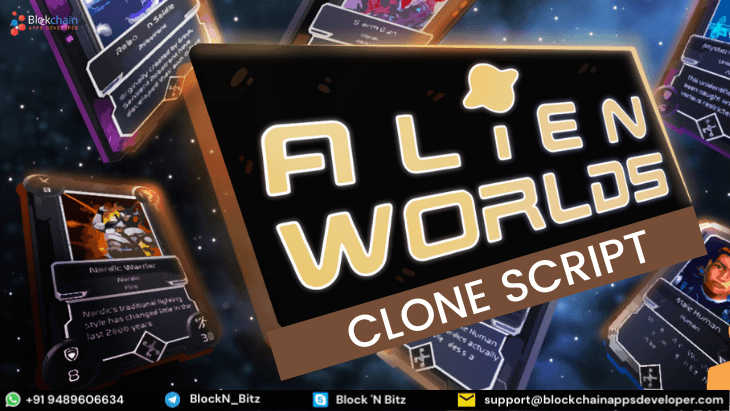 BlockchainAppsDeveloper is the top NFT Marketplace Development Company that creates and implements NFT Marketplace Script to assist you in creating your own NFT game comparable to Alien Worlds, which is known for its uniqueness and flexibility.

Alien Worlds is an NFT Metaverse where you can interact with unique digital objects (NFTs). The Alien Worlds NFT Game clone script is a ready-to-use option for creating your own NFT Game with similar features to Alien Worlds, the most popular blockchain-based NFT Game today.

It allows users to vote and raise the pool's Planetary prizes by staking Trilium.

Users can choose from a range of NFT Gamecards for mining, combat, and missions on WAX, BSC, and Ethereum.

Creating a Link Between Cross-Chains

This capability allows Trillium (TLM) to be transported between BSC, Ethereum, and WAX.

DAOs on the Planet

Users can participate in weekly elections and provide suggestions on how the planetary treasure should be allocated.

In Alien Worlds, there are six different levels of rarity for Digital Items. Abundant, Common, Rare, Epic, Legendary, and Mythical are the different types.

Shininess is divided into four categories: Stone, Gold, Stardust, Antimatter, and XDimension. Except for XDimension NFT game cards, which can only be acquired by opening a rare pack, lower-level goods can be welded together to boost their shine and qualities.

In Alien Worlds, the land is a collection of NFTs that represent parcels of land on the planets. If you own property, you have the option of mining it yourself or charging miners a commission.

Each player is given a free shovel, to begin with on this level, which has a very limited mining power. There are a variety of tools, each with its own set of advantages and disadvantages. Players can use three tools at the same time on the platform.

Minions are the NFTs utilized in the fighting game and can be used by communities in their own games. In the Thunderdome and around the metaverse, minions are looking forward to the games.

Both an attack and a defense rating are assigned to weapon NFTs. They can be used by creators and communities across the Metaverse, and Explorers will use them to fight other Explorers in the Fighting Game.

Avatars are NFTgamecards that have your face on them and can be used to play the game. Greys, Little Green People, Reptiloids, Nordic Robotrons, and other characters are among the Federation's avatars.

Completing tasks on Metaverse will earn you these. In Alien Worlds, there are three different Mission NFTs to choose from:

Base Power as well as

By merging smart contracts and games, users can create their own Mission. NFT

Blockchain Apps Developer, the top NFT Gaming Platform Development Company, provides the greatest Crypto Quality of Service in the industry and prescribes the best accessible solutions in the market to crypto entrepreneurs.

BlockchainAppsDeveloper is a well-known platform that offers professional services at a reasonable price that are tailored to your specific needs. Alien Worlds Clone is the quickest and most convenient way to get your NFT Gaming Marketplace up and running. Please contact us as soon as possible!

Disclaimer: We use the term "Alien Worlds" for readers to quick understanding purpose only. Our services are not meant to influence any entity.