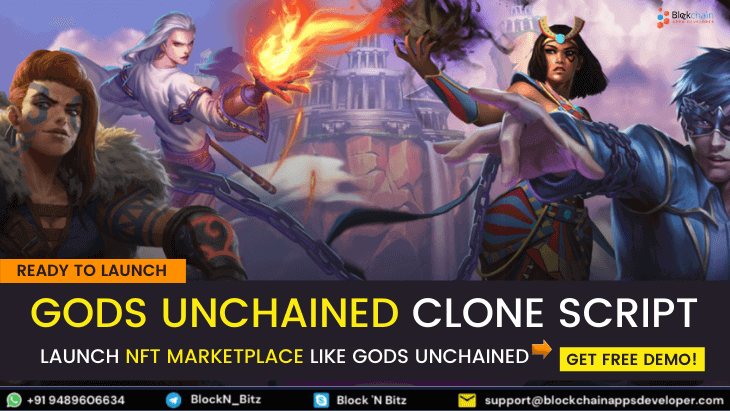 In addition to that, smart contract integration plays a major role in these decentralized trading games. Transparency is the topmost highlight as it stores all the transactions and trades, thus benefits will create trust among the players or gamers to spend more time.

You can Fix your own rules and regulations for your games. Gods Unchained Game Clone platform Script and decentralized trading card game clone script is highly beneficial for Game players and crypto investors.

Develop Your Own Virtual Trading Card Series and NFT marketplace Game By availing of our Gods Unchained clone Script Solutions at BlockchainAppsDeveloper.

We design and develop Gods Unchained-like marketplace where crypto players can buy and sell digital collectibles and trading cards and can use their gods to eliminate opponents and its not charge any commission.

The Blockchain Game concept of NFT has given so many profitable business opportunities to the people, NFT gaming business model has become a great platform for crypto investors and gamers to invest in and rise to the necessity in the digital space.

So, now is the perfect and right time to launch your own blockchain-powered NFT Marketplace like Gods Unchained. Our NFT marketplace gaming platform development services will make you a record-breaker in the Blockchain-based NFT gaming domain.

BlockchainAppsDeveloper, the Leading Blockchain Games Clone Script Development Company - A responsive web solution that provides decentralized gaming solutions through DApps and in exchange for cryptocurrency or digital currencies. We have

We are the leading experts in Blockchain and NFT Game clone Development services to assist you in the development of your own desired Online game based on NFT Marketplace.

We provide a 100% NFT marketplace platform like Gods Unchained on the Ethereum Blockchain network, implemented with exclusive functionalities and features thereby satisfying your game business requirements.

Our Blockchain Game Development services will create a massive profit in the gaming business there is no doubt about it. Our Blockchain Apps Developers render your outcome as much as perfect.

Investors and Crypto startups can approach BlockchainAppsDeveloper to build and launch a world-class Gods Unchained like NFT Marketplace at a reasonable price.

If you think it's the right time to launch your own blockchain-powered NFT marketplace like Gods Unchained?

Disclaimer: We use the term "Gods Unchained" for readers to quick understanding purpose only. Our services are not meant to influence any entity.