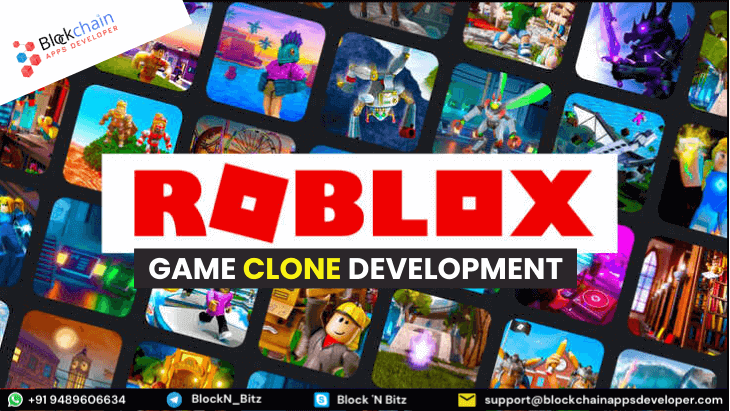 Roblox Game Clone Script is an online game platform and game creation platform script that permits players to program games and play games developed by other players. Roblox is a game-making and game-playing platform where anyone can create and play games. Right?

With 56 million monthly players, it's one of the most popular online destinations.That's more than Fortnite has to offer! Roblox still has fewer players than the popular Minecraft, but the newer gaming site is catching fast.

Roblox clone is a large online platform where kids may create and participate in "immersive 3D worlds," as its creators define it. On the Roblox clone, what types of games can you play? You can play it if you can picture it!

Players can search via a list of over 40 million games after creating an account. What if a user is unable to locate a game that they enjoy?

They'll be able to make their own! Each user has the ability to create their own games with the Roblox clone. You have good news that Robust clone platform development services are offered by BlockchianAppsDeveloper.

Roblox Game is not a single game, but rather a set of over 50 million games designed and developed by its user community. The most obvious comparison is to YouTube, which is a large library of "user-generated content," but instead of videos, the content is games.

Children and adults alike can use the Roblox game application for desktops, game consoles, smartphones, and tablets to browse and play the Roblox game library. Its social features, such as the ability to add friends and communicate with them while playing, are also significant.

Roblox isn't a brand-new concept: it launched in 2006 and has been steadily evolving since then. As a result, we offer Roblox clone development on a platform with identical features and technology.

How popular are Roblox games?

In certain circumstances, incredibly popular. Adopt Me!, a pet simulation game in which youngsters buy and care for animals, reached 1.6 million concurrent players in April 2020, according to the game's makers, and has been visited over 20.4 billion times. (The amount of unique logins has not been made public by the developer.) Another game, Brookhaven, had the most concurrent users at the time of publication, with over 420,000 players.

This Roblox clone gaming platform is build-in with a collative games hub, and anyone can create a game (or "experience" - they can just be virtual places). According to the firm, it has over 2 million "creators," or about 2% of its users, with the most popular games being played by up to 100,000 people at once. Since the development of multiple games hubs, you can choose games among various options and you are able to build games with given options of avatars, features, location, visuals, etc.

Many adults' and children's goals are limited to constructing a basic game or virtual area where they can hang out with friends, while others build larger, more intricate games, and even start making money by taking a percentage of in-game sales made with Roblox's virtual currency, Robux. In 2019, the business aims to pay them more than $100 million. Similarly, BlockchainAppsDeveloper offers special services that include a collection of gaming platforms such as Roblox and Minecraft.

What Makes BlockchainAppsDeveloper Stands Out?

Would you like to launch a similar game making platform like Roblox? We have a strong team with efficient skills to help your desired business.

Disclaimer: We use the term "Roblox" for readers to quick understanding purpose only.Our services are not meant to influence any entity.