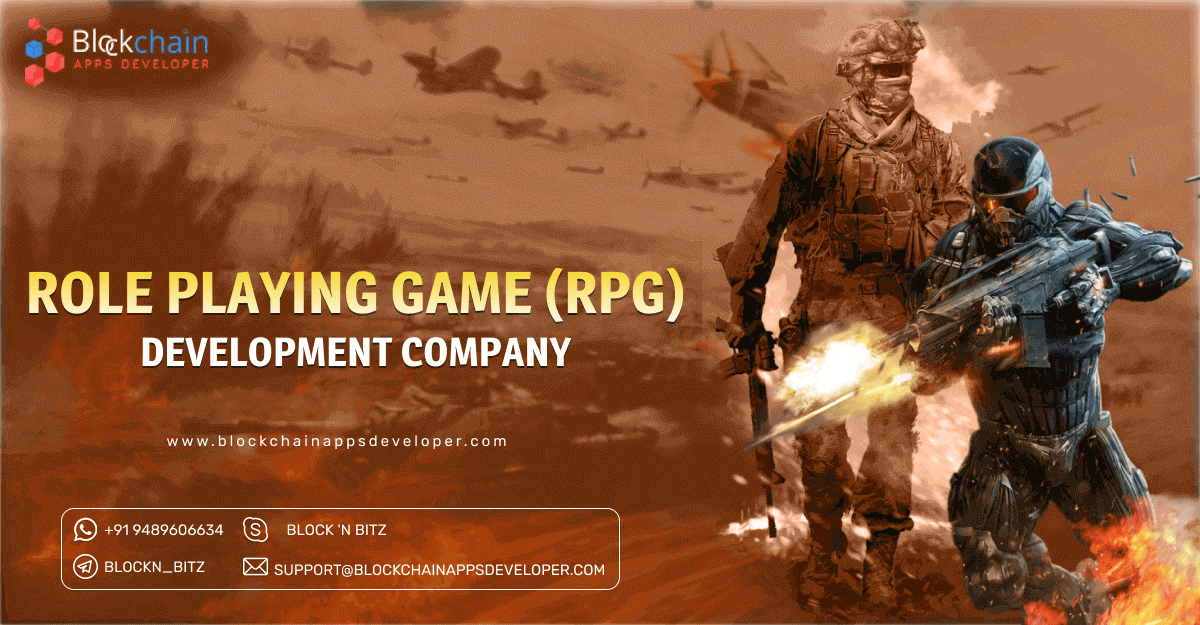 Ceaselessly in the thought of controlling your fictional character the way you always dreamt about a gaming character & the  story that you wished to bring in realm? Then Blockchainappsdeveloper aces are here to assist you with your ideas and witness the magical creation.

Get A Free Quote For Role-Playing Game Development

Users in the platform play a version of a game that includes access to a persistent world online through the game's interface, and BlockchainAppsDeveloper is a superior game development firm that offers Role Playing Game Solutions. With the skills of blockchain developers in a range of verticals such as artificial intelligence, audio effects, 3D graphics, animations, and a variety of other components that give online games an elegant appearance, we produce Role-Paying Games (RPG).

A Role Playing Game (RPG) is an online video game where each participant thinks them of a role from a character created, usually, in a fantasy or science fiction backdrop, by which interacting within the game's imaginary world. Role Playing Games (RPG) are one of the most popular game genres in the world and are played incredibly across all gaming platforms like PC, Console, and Mobile.

We BlockchainAppsDeveloper create Role-Paying Games using blockchain developers' who are skillful in a variety of verticals, including Artificial Intelligence(AI), Audio effects, 3D graphics, Animations, and various other components that showcase online games with an elegant appearance (RPG). RPG with its elegant story and character development  mechanism attracted and gained a never ending  gamer fan-base.

What is the essence of a role-playing game?

A role-playing game (RPG) is an online game in which each player assumes the role of a character who interacts with other characters in the game's fictional universe, which is usually set in a science fiction or fantasy setting.

Those Players are in control of portraying these characters in the game's storey, either through literal acting or a systematic character development decision-making process.

Our modifiable app development professionals are always prepared to take on challenging projects. Our cost-efficient solutions catered specifically to make your business grow!

Many distinct sorts of role-playing games (RPGs) are created in various areas and with various gaming techniques. Because of the availability of different types of computers and cultural differences, there was a significant gap between Japanese RPGs (JRPGs) and Western RPGs early on. Final Fantasy is one of the most popular Japanese role-playing games. Most RPGs are now available worldwide.

console for video games RPGs use game mechanics and, in many cases, settings that are derived from classic role-playing games. There are numerous console alternatives available nowadays, ranging from Xbox to Nintendo and Playstation. Modern video game consoles are capable of handling high-definition games with several minigames and side quests.

RPGs for a single player

This is a game in which you play from a single point of view and frequently use character creation panels to allow the user to create their avatar with numerous traits. The best RPGs offer a variety of pathways to choose from throughout the game, making each playthrough unique.

Online RPGs with a large number of players (MMORPGs)

These games, which combine features of MMOs and RPGS, feature spectacular showdowns and battles between various players in the market. Among the most popular multiplayer RPGs are Fortnite, World of Warcraft, and League of Legends.

The battles take place in real-time, allowing gamers to practice their quick-response battle skills. Some MMORPGs are co-op games, which require players to work together with other members of their party to overcome their opponents.

Games in which character units are deployed against opponents and fights take place on a map. Because tougher, higher-leveled foes tend to overpower underdeveloped parties, character, and party growth is more crucial than battle choices.

With a strong emphasis on fighting, this RPG genre focuses on battles rather than characters or storey. The Legend of Zelda, Dark Souls, and Mass Effect are examples of action RPGs with popular fighting systems.

These RPGs are made for world exploration, and they take the longest to complete due to their size and complexity. The Elder Scrolls, Disco Elysium, and Bethesda Softworks, and Interplay Entertainment's Fallout series are some of the most popular RPGs in this genre.

Strategy games like chess and tabletop war games like Risk inspire this type of RPG the most.

The gameplay components, rather than the concept or style, define this role-playing subgenre. A dungeon crawler character who navigates difficult levels, the main character's irreversible death, and randomized content are all prevalent rogue RPG characteristics.

Coming up with a Gaming Environment That Has Never been Witnessed Earlier!

RPG game development platform is supported  with easy-to-learn user interface,where you can design every part of the game with the visual editor.

Best action RPG games assists in creating an  interactive story games even if users don't know how to code.

BlockchainappsDeveloper, personalized Role Play Game platform development, in which players should be capable of  finding new sections of the RPGs through different characters and aisles.

Why BlockchainAppsDeveloper For Role-Playing Game Development?

BlockchainAppsDeveloper is a prominent NFT Game Development Company with professionals in creating RPG games for various platforms and genres by using accessible game engines, multiplayer game support servers, etc. If you're curious about creating a Role Playing Game shortly then hook up with our team for end-to-end development services.

Each program is distinct and assessed individually and our skilled RPG game developers create high-quality 2D and 3D designs that function smoothly. Our Developers are well Versed in Cutting Edge Technologies,

BlockchainAppsDeveloper are pleased to support and assist you at anytime in developing an ideal and customizable gaming platform according to clients needs with our specialized techniques.

Get A Free Quote For Role-Playing Game Development