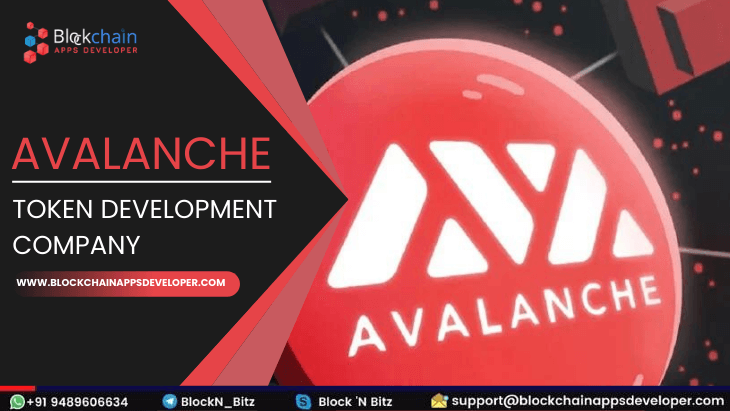 As a leading Avalanche Token DevelopmentCompany, BlockchainAppsDeveloper helps to build & Create your crypto Token on Avalanche Blockchain network along with high secured features and solutions.

Creating Avalanche token in avalanche token development company. The platform enables anyone to create custom blockchain apps while taking advantage of the Avalanche consensus algorithm. Managing such a many users is difficult.

In addition, the platform emphasizes transaction speed, lower prices, and is environmentally friendly. Our BlockchainAppDevelopers support you in launching Avalanche token development with unique features based on the requirements.

The features of Avlanche token development are as follows

The key entrance point into the AVAX ecosystem is the development and exchange of new assets. This blockchain is a virtual machine known as Avalanche virtual machine (AVM).
Utilized for developing new, and trading AVAX native assets.

Anyone can establish an L1 or L2 blockchain using P-chain. You could even put together a group of them. These blockchains are known as subnets in an avalanche, with the P-chain serving as the default subnet for everyone.
The P-chain keeps track of the validator to govern the landscape of avalanche subnets, but subnets are also responsible for verifying the P-chain.

Developers can use this capability to create decentralized applications on avalanche while taking advantage of the security and scalability of the platform.
The C-chain is an EVM compliant smart contract platform such avalanche platform.
Anyone can use it to deploy ethereum smart contracts because Avalanche is EVM compatible.

Avalanche is an open-sourced platform for creating decentralized apps and enterprise blockchain deployments in a massively scalable and compatible environment. Avalanche is the world's first decentralized smart contract platform with instant transaction finality, designed for the size of global banking. As the solidity functions out of the box, ethereum developers can easily build on avalanche.

Avalanche is distinguished from other decentralized networks by its consensus protocol. People have developed the misconception that blockchain must be sluggish and scalable over time. The avalanche protocol uses a revolutionary approach to a consensus to deliver its strong guarantees, high throughput, and speedy finality without compromising decentralization.

The Avalanche token is an AVAX-native token of a utility token that acts as the primary medium of exchange. AVAX staking protects the network and pays stakers with more AVAX in addition to its use as currency in the Avalanche realm.

Staking increases the value acquired by using the AVAX deflationary token technique. The AVAX tokens that were used to pay transaction fees are destroyed, permanently decreasing the cost of AVAX in existence.

This token plays the same role on the C-chain that ETH does on the ethereum network. When you create or call a smart contract, you pay the transaction fee with AVAX. Using native EVM tools and libraries, you can transmit AVAX to a smart contract and move AVAX among accounts.

The most fundamental and vital notion in Ethereum is ERC20 tokens. As the Avalanche community and ecosystem expand, additional use cases and applications based on Ethereum or another blockchain will be added to the platform. the token standard that will be utilized for the projects is not set and anyone can make their standard and token. As a result, we will create the ERC-20 coin that we can mint to any address we desire. The token will be created on the Avalanche C-chain and will be accessible from these.

The essential thing is to keep in mind is that we will be deploying a solidity-based smart contract to Avalanche. This is a benefit that Avalanche offers us: the ability to deploy any smart contract to the chain without the need for a new language-specific contract concept.

BlockchainAppsDeveloper is a leading token development company to create Avalanche tokens. We provide a wide range of blockchain development services to assist businesses in adopting cutting-edge technology and gaining significant competitive benefits. As a result, we did an extensive study on an avalanche to establish sound strategies for utilizing its industry use cases. Our skilled expert developers can discover, analyze, and integrate the latest blockchain protocols to stay up with changing requirements is something else that set us apart.

If you are planning to create Avalanche token development. Contact our experts!