Get Started With NFT Marketplace Development

Revolutionize your finance firm with our Decentralized Finance Development Services

Home > Blog > How To Build an Ethereum Token Generator Platform Like Togen.io? A Comprehensive Guide 2021

How To Build an Ethereum Token Generator Platform Like Togen.io? A Comprehensive Guide 2021 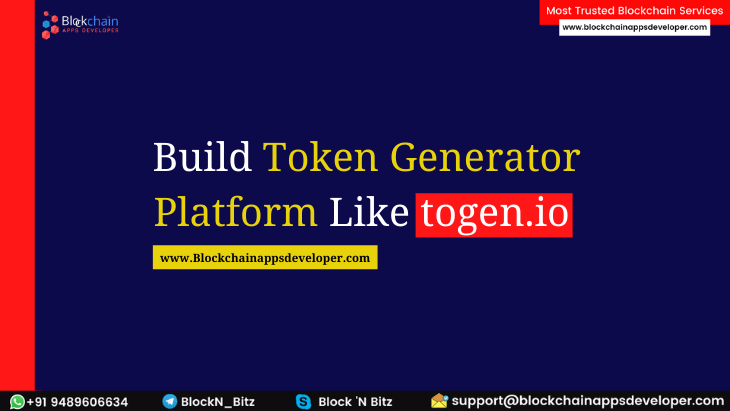 Togen.io Clone Script is a readymade Ethereum Token Generator website script, that is integrated with similar Togen.io functionalities as followed like in togen.io  (i.e) Togen.io Clone website in default comes with generating Ethereum-based tokens and crowd sale campaigns - where people can create Ethereum tokens by themselves without any programming coding knowledge & anyone helps.

We, BlockchainAppsDeveloper offer an advanced Togen.io Clone Script to Start Smart Contract Generator for ERC20 Token like Togen.io in a week!

How to Develop an Ethereum Token Generator Like Togen.io?

To start an ERC20 Token Generator Platform like Togen.io, you need expert consultation and necessary ERC20 Token Generator development support. Another most cost-effective way is purchasing a Togen.io Clone Script and start customizing as per your business requirements. We, BlockchainAppsDevelopers offer WhiteLabel Togen.io Clone Script with advanced business functionalities and secured features.

The self-executed ERC tokens build easily because it has in-built program coding which aids to develop Ethereum token easily without much need of program coding language. In The Token generation platform, the Ethereum tokens can be automatically designed and developed from scratch as per the user's requires and they can also fix their supply value of the mentioned token. Those crypto tokens can also be used and performed in ICO business platforms if it is required.

Almost 100% of people who have Ethereum know token generator platform togen.io for its reputation, quick ERC20 Token Creation, and its profit percentage. Run your own secured Smart Contract Generator for ERC20 Token similar to Togen.io will get you unbelievable profit.

Blockchainappsdeveloper ERC20 Token Generator Platform Development solution is developed for people who want to be a giant in cryptocurrency & Blockchain markets.

How Much Does it Cost to Build a Token Generator Platform Like Togen.io?

The cost of Togen.io Clone Script or ERC20 Token Generator Script depends upon the basic and advanced features you are looking to implement. To get a quote for your togen.io clone script here!

Ethereum token got a special and significant place in the cryptocurrency market while comparing to other crypto-based altcoins. The main reason it is one of the 2nd-largest blockchain networks and its compared cryptocurrency market cap value is always the remaining high starts to stand next to the 1st popular bitcoin price.

Togen.io is a platform for generating Ethereum-based tokens. It also generating Crowdsale campaigns, without coding in a certain standardized and secure fashion method. Ethereum token got a special and significant place in the cryptocurrency market while comparing to other crypto-based altcoins. The main reason it is one of the 2nd-largest blockchain networks and its compared cryptocurrency market cap value is always the remaining high starts to stand next to the 1st popular bitcoin price.

The Ethereum tokens are highly wanted and preferred than others because of it is well perfectible at the usage of any Dapp. And, The token generation platform provides a great aid for that by developing Ethereum token in just 7 simple stages. They are,

Token Name - Token name is the first step to do.
Package - The package price can be adjusted based on the crowd sale.
Supply - Here in supply section we can decide the supply price of token for building.
Decimals - Decimal price can also be decided which shouldn't exceed 4 decimals.  Additionally, Ethereum has 18 decimals.
Type - The cryptocurrency type can be any format, it can be fixed here.
Token Symbol - The Token Symbol can be developed & updated easily here.
Create ETH Address - The last final step on the token creation is, developing the address of the tokens, which will be instantly updated with the aid of MetaMask.

Can I start my own Token Generator Platform like togen.io in a short span of time?

You can Launch now and if not now then when. We do have a readymade ERC20 Token generator platform and it can be up and running on your live server within 24 hours. Very easy process and quick isn’t it.

What is the Technology Stack used behind ERC20 Token Generation Platform Development?

Blockchainappsdeveloper's ERC20 Token Generation Platform Development business solution comes in different technologies like PHP LARAVEL, MEAN stack, MERN stack, core JAVA. Database MYSQL, MONGO. The main reason for those technologies we use is the Ethereum Token Generation Platform needs to robust and also simple for the customers to use. UI/UX can be customized as per how you wish.

Why should Crypto People Create Tokens?

Tokens permit for the free transfer of value-based cryptocurrency assets or utility cross-borders in a particular censorship-resistant fashion business model. Though, you can add "whitelisting" -(some privilege Access) in order to vet the cryptocurrency business people who own your crypto tokens. Cryptocurrency Tokens are the best way to take a patent, business market line, private based equity stock, or other crypto assets and create them available and maintained by the public sector.

In this situation, doing this is a cumbersome significant process. This creates it very easier. Regarding dex exchange, we are launching a decentralized exchange based on an insurance cryptocurrency market for asset ranking that secures token users or participants around the globe looking best business projects to finance.

In the cryptocurrency world, peoples are seeking a new way to get mintable Ethereum tokens because of its quality and its usage are reaching a new peak in 2020. Did you have a question like what is mintable? What is the benefit of a mintable erc20 token?

In this blog, you will know all answers to the questions as well as going to gain a clear idea about the Mintable ERC20 token.

Before going to the topic just remember what is tokens and their standards in a simple process.

Tokens are the programmable digital units of value that are recorded on a distributed ledger protocol such as a blockchain. Tokens do not have their own blockchain but depend or exist on an existing blockchain. The tokens used to trade goods and earn loyalty points, gaming, etc. A token value is represented by the owners. The most commonly know token standard is Ethereum’s ERC20.

What is Ethereum Token?

Ethereum is a cryptocurrency and it has its own largest blockchain network after bitcoin in the cryptocurrency world. In the Ethereum blockchain network, a huge amount of computers is that are interconnected joined as nodes. In fact, the entire network can run on “Ethereum Virtual Machine”. All transactions that have taken place on this network securely through a distributed ledger.

What is ERC20 Token?

ERC20 is the Ethereum token standard is used in smart contracts on the Ethereum blockchain network.  Erc 20 token is famous in crowdfunding companies that are offering ICO (initial Coin Offering ). An ERC20 is software or code maintained in a secure protocol. It regulates the smart contract function and ensures all the technical specifications of the tokens. If a token doesn’t meet the function of the smart contract, it won’t be called an ERC20 token.

What are Mintable Tokens?

Mintable tokens are ERC20 adaptable tokens with added feature like new tokens can be created at any time and added to the total supply in the network. Standard ERC20 tokens don't have this feature, which makes them a fixed supply tokens with decided price and functionalities.

The mint function is defined like this in Solidity program code:

New tokens can be minted only by a unique address which is set to be in a Minter role. If the is no address in Minter's role, then no one can create new tokens.

What is Minter's Role?

Minter role has special ownership to create a new unique address for each token adding them to the total supply. There could be multiple Minter role addresses that deployed in the token smart contract. The current minter can have the authority to add a new minter, renounce the minter, or transfer his right to another address.

• Adding the new Minter - This can be done by the owner of the token, where the one minter can add other minters by some call function.

•  Renouncing the Minter Role - This renouncing can only be done by the address holder of the token they can announce their ownership again and again themselves.

• Transferring Minter Role - This process is like give the minter authority of token to the other person as well as removing the before ownership of tokens.

• Establishing the token property to anything.

• Tokens for sale with a unique address

• Tokenize anything for your business in the form of credit, discounts, or coupons.

Mintable tokens used in the artificial market, to attract something to your customers.

Here is the example of Mintable ERC20 Token Projects

Status (SNT) -  The Status network token (SNT) is a decentralized utility token open-source that pushes their notification into the market often, governance of the Status client build an interface through a mobile app, along with clear user-generated content on the network

Dai (DAI) - It is a USD-pegged Stablecoin created in Ethereum blockchain. Which is used in the MakerDAO system, where the users can lock their asset in the MakrerDAO smart contract, in the form of a DAI token. The locked tokens are in CDP (Collateralized Debt Position), the new DAI tokens are minted.