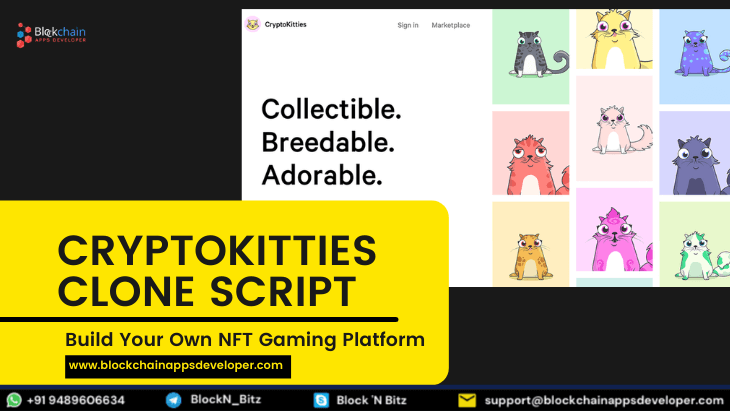 CryptoKitties was one of the first games on Blockchain Technology. CryptoKitties offers the same operations and makes things like Bitcoin even being a non-digital currency. CryptoKitties Clone Script is the complete source code that replicates CryptoKitties providing the addition of comprehensive customizations to match the requirements stated on the concept.

The features of CryptoKitties promises to provide a complete enhancement for each users part through several main accessible features;

Build Yours: Customizable avatars to create your own unique appealing creatures for your game. You can sell your crypto creatures by listing it on the marketplace where the buyer can easily access and purchase it.

Secure by Contract: As your Crypto-kitties are built on Ethereum Blockchain ERC721, with the use of the smart contract module you can safeguard your asset or the digital collectible creatures.

Minty-Kitty: The participants are allowed to create their own creatures and can breed them on the Cat Community by minting.

Timely-Sale: Clock Auction mode is integrated for the correct flow of sales which helps in generating revenues by adjusting the highest opening and closing with the lowest bid.

Feed by Breed: You can breed your cat couple and create unique offspring and feed your collectibles through buying and selling.

Dashboard: An Admin dashboard is provided to enable you to watch the data and the real-time analytics in analyzing the trade. It can also give you the transaction information and the commissions you received at the time of buying and selling.

Game Guide: A proper Whitepaper will be created by us to show about your game to educate the users about its features behind it.

CryptoKitties Clone Script offers an exclusive deal with the users and thus standing as one of the top trademarks in the gaming industry. You opt for the CrypotoKitties Clone software to make and create your own avatars with customization on the Ethereum Blockchain. The craze among the NFT Games like breeding crypto collectibles is a present leading people choice to make use of time and money.

You can work and get for your exchanges by collecting and breeding the adorable creatures called as CryptoKitties, Each Kitty has its own traits and appearances with a unique genome kind and 100% owned by you that cannot be destroyed or replicated.

CryptoKitties - Collect and Breed to Earn with Blockchain Technology

Gaming Exchanges like CryptoKitties had made a wonderful impact among the people by innovating the developed application of Digital Collectibles, scarcity, and NFTs. Initial Coin Offerings have shown many that it is the best choice for raising funds through Crypto exchange platforms. This was the beginning of the Gamification model of crowd-funding that still makes a unique stand among Crypto users.

CryptoKitties has inspired the simple gamers living in a Decentralized State by its success that creates a huge hype in the Cryptocurrency industry. We design you an astonishing application with our own CryptoKitties Clone Script that will never let your scope down through enhancing the goal of your business.

Cryptokitties Clone Script is an exact product of CryptoKitties that are digital collectibles represented as Cats built on the Ethereum Blockchain. This CryptoKitties Clone Script is designed to buy and sell using ether and bred by creating new cats. These collectibles of cats are stored in a smart contract on the Ethereum Blockchain.

It is determined by its immutable genes that are further displayed as unique appearances that are distinct from one another. Users can create new collectibles and trade them that make the users exciting and a self-sustaining community.

CryptoKitties Clone Script is the recent demand from all the sectors of users within the Blockchain Network as it attracts them with an interactable gaming experience that can give possible Crypto income by trading the collectibles.

We at Blockchainappsdeveloper have traveled a long way in developing Blockchain-based applications to balance the needs and requirements of businesses and enterprises.

How Can You Generate Revenue on CryptoKitties?

You can make use of the CryptoKitties for your economical source by developing these proven functionalities through our CryptoKitties Clone Script. The empowerment is concentrated on the smart contracts which are still immutable in nature thus leading to a flawless and boring-less trade through high-security features.

For your revenue generation, we focused on developing with utmost effort as a public model that is tested and proved the mechanism in generating revenues for the users.

By pioneering ERC721 as a non-fungible Token protocol, provides a sustainable revenue model by receiving 3.75% of each transaction taking place on its marketplace. Revenues are also generated at the time of cat sales and are limited to 50,000 known as "Clock Cats" that are released via smart contracts every 15 mins. A Clock cat's price is calculated by the last five CryptoKitty sale's average price.

Creating a descending clock auction the seller can choose a high opening bid and a low closing bid operated on the Ethereum Blockchain that is associated with breeding actions too.

Having a variety of integrated revenue models and working processes can easily balance the economical growth of the trade using the collectibles.

Why BlockchainAppsDeveloper For Cryptokitties Clone Development?

Blockchainappsdeveloper is the only place where you can come and build your own NFT game as we are the leading and experienced Dapp Development Company.  We help you to earn not just single but double profits with our very own innovative Cryptokitties Clone Script, a white-labeled crypto collectible platform.

You can opt for our service for your customizable CryptoKitties software and make your earnings maximized.

Disclaimer: We use the term "Cryptokitties" for readers to quick understanding purpose only. Our services are not meant to influence any entity.