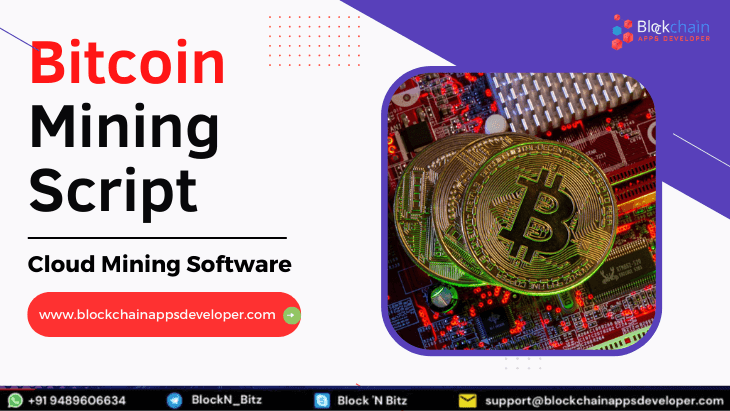 How to make money using a bitcoin mining script?

Bitcoin mining script - The first class web solution to simplify the bitcoin and crypto mining process, and to develop bitcoin mining as a business.  It is a bitcoin mining  script/software that can be installed server which you used to mine bitcoins. The major functionality of bitcoin mining application is to split the complete power into hash power or the computing power.

How to build money using a Bitcoin Mining Script Software?

In general, to crypto folks can mine bitcoins in an ultimate 3 ways,

Type 1:  Folks will install software/script in CPU, and the software/script will be automatically run whenever the systems switch on. Actually this mining script or software will not get you 100% satisfactory results and the final will result in mining a few number of bitcoins.

Type 2:  Mining bitcoins by arranging up dedicated mining equips & by certain specialized mining server's. But this kind of procedure will cost too high and this procedure need a continuous electricity supply provision.

In this 3rd way, crypto folks can mine bitcoins by getting connected with certain cloud mining organizations or companies. There will be a particular option to choose the desired budget. Based on the cryptocurrency or crypto coin and the hash power the cost may difference. When comparing above 2 ways that Bitcoin cloud mining process is found to be the best result in also get high ROI, in the cryptocurrency mining business point of view.

A bitcoin mining script/software can function in two ways.

1.  bitcoin mining script/software helps you to build a user interface ( i.e. A platform or website, where the user can monitor their entire mining progress)

BlockchainAppsDeveloper, we provide all kind of services in cryptocurrency industry and mining is one of the best and successful cryptocurrency business script solutions.

We also provide the best bitcoin mining script software (Cloud mining), that has been charged with latest admin panel, and to operate complex hashing algorithms and methods.

Tell us know about your project!