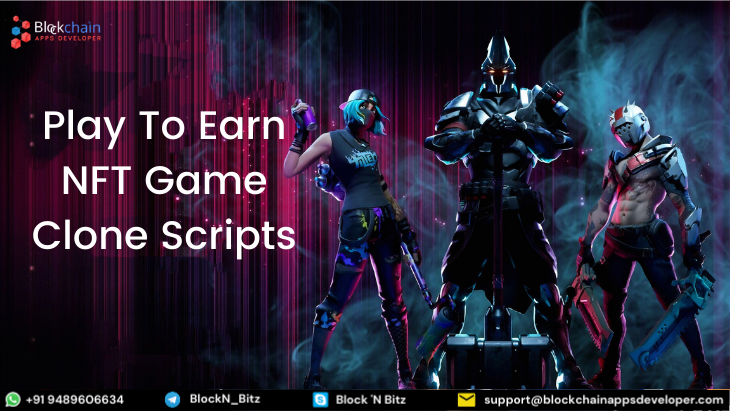 Get Best Play To Earn NFT Game Clone Scripts 2022 From BlockchainAppsDeveloper. Play-to-earn as a business concept has acquired traction not only inside the industry but also in the general public.

The popularity of gamified finance, the Wax blockchain, and Axie Infinity have helped to bring play-to-earn games to a wider audience. Play-to-earn as a business concept has acquired traction not only inside the industry but also in the general public.

Overall, customers may connect with gaming dapps, earn money, and do so without the transaction costs that are normally associated with blockchain games.

BlockchainAppsDeveloper provides Axie Infinity Clone. It is a digital trading game based on the Ethereum blockchain that allows players to raise, combat, breed, and trade in the same way that Axie Infinity does.

The Zed Run Clone is a Blockchain-based NFT Game. And it is a Digital Horse Racing Game Script that may be used to start an NFT game similar to Zed Run. Anyone may create a Zed Run NFT Game and Zed Run Marketplace Platform with our Zed Run NFT Clone, where NFTs (horses) compete against are other for big ROI.

We provide Cryptokitties Clone, which is an NFT Gaming Script based on the Ethereum Blockchain that may be used to create Cryptokitties-style DApp games. Avatars can be customized to create unique and beautiful creatures for your game.

Sorare NFT Clone includes all of the user and admin functions, as well as the UI of the gaming platform, to meet your NFT gaming and marketplace needs. Sorare NFT Game Clone is an Ethereum-based NFT Marketplace that sells digital memorabilia centered on football.

Binemon Clone is a ready-to-use website script that allows you to create a virtual NFT pet game that is identical to Binemon. A latent role-playing game in which players acquire and land people, exchange eggs, and other commodities is the Binemon clone. They are able to fight and win battles in the same way that they can on other gaming platforms.

Sandbox Clone is an individual marketplace script with an emphasis on 3D crypto-assets. With the development of newer multi-media formats for the NFT trade, you may supply your players with the dependable Sandbox clone and configure it with your own desired features.

Polkawar Clone is a clone written on a Decentralized Blockchain network to create an NFT game that plays traditional battles and betting. With this exciting and thrilling combat game, you can use NFTs to raise mana on the battlefield - Increasing the Gain Value of NFTs by trading with another user by minting game characters, equipment, and utilizing battle weapons in the form of NFTs.

The MegaCryptoPolis Clone is a decentralized city-building game. This game allows users to purchase land, develop it, and earn resources in the process. Cities XL and SimCity 4 are two examples of traditional simulation games. Unlike traditional games, however, MegaCryptoPolis allows participants to gain while they play.

From BlockchainAppsDeveloper, you may easily launch any of the above-mentioned blockchain games!!

BlockchainAppsDeveloper - The premier Blockchain Game Development Company - provides a superlative blockchain gaming platform with unique, interactive, first-rate functionality, and advanced security that provides players with the greatest possible experience. We seek to design a solid blockchain game platform with an intuitive UI/UX that is available for both Android and iOS as a professional Game Development firm.

We create your ideal gaming platform based on your business needs and requirements, which include features, technological stack, API integration, development effort, and more.