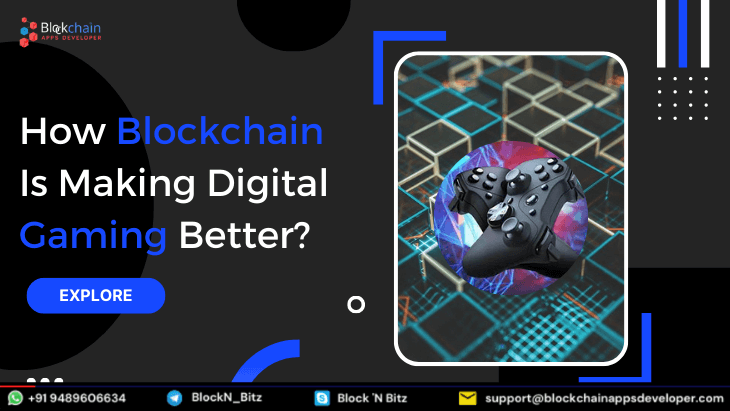 The gaming industry has experienced many degrees of evolution and it still boosting its measure in every way. We all have played on 16-bit gaming consoles like Super Mario and Contra. Just think about the evolution of that simplistic gaming industry into a warehouse of emotion-churned-up, fascinating virtual reality games.

American science fiction writer Ernest Cline in his novel "Ready Player One" describes a grandiose virtual reality where people spend the majority of their time playing VR games, which offers an escape from a reality battered by social, economic, and political strife. This is a world where digital currency is more stable than fiat and players can assume any identity they can imagine. A world that is being built today.

How Blockchain Gaming Can Help?

The above predicament explains the need for blockchain development in the gaming industry. If you're interested in understanding how blockchain can enhance the gaming industry. The greatest answer you'll find is, that it's an incredible market with many business opportunities to be explored. You have to know the benefits of using Blockchains in Digital Gaming.

Safe and Secure Environment for Developers and Users

Blockchain platform provides data encryption technologies like the private key, and public key to protect your crypto transactions and digital assets. No other third party can track or hack your data encryption. Buying and selling cryptocurrencies is now easily within the blockchain platform. If players and developers secure their private keys, their transactions are safe.

Hackers are happily accommodated by the centralized servers because it's just one stagnant target for them. Blockchain technology can eradicate that heist. When players and developers buy and sell their digital collectibles, they can secure their currencies in their crypto wallets. Players can truly own their In-Game assets. In recent times, gamers don't own their actual gaming assets. Blockchain-based games will equip real game assets to the players by governing transactions.

New Kingdom of Developers and Gamers

Even an amateur, who wants to create a Blockchain game, can effortlessly create his/her digital game. They can comprehend other Blockchain games, as they are open-source. You can view the code of similar games if you need clarification. Players can collaborate with game developers to improve their games. This is possible because the developments in blockchain apps are driven by in-built community consensus.

If the developers build an impressive game with all their expenses on the blockchain, players won't be shirking away from projecting real value on intangible digital collectibles. Blockchain also enables the creation of rarer In-Game assets. The existing game industry will become more established in the future so that rarer digital collectibles in the game will entice greater prices.

Now you've learned the benefits of creating Digital Games on the Blockchain Platform. Gaming and blockchain are natural partners. If you're planning to invest in the blockchain gaming industry, If you want to build a viral game, you can ask your queries to our experts about blockchain game development.

You can contact us immediately to make your Blockchain game development. We provide Market-ready Blockchain/NFT Game Clone Scripts includes,

We apply the latest technologies that can support you to build your own Blockchain Gaming Platform and attract players to invest in crypto/digital collectibles, properties and art pieces in the digital gaming world.