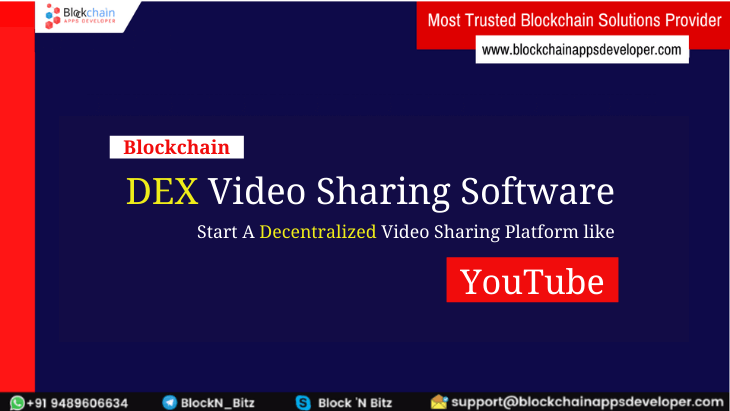 Blockchainappsdeveloper, the blockchain development company, has been offering DEX Video Sharing Script to startups and entrepreneurs. It is completely based on blockchain. There’s no central authority to control the system, as the entire system is permissionless. Such decentralized media platforms will be revolutionary in the upcoming years.

From kids to grannies, YouTube has more than 2 billion users in total all around the world. No wonder YouTube became the second most popular social media platform after Facebook. Beyond users’ freedom to upload their videos, it is also an important platform for marketers and advertisers to promote their brands. YouTube is accompanied by a lot of video streaming and sharing sites, and they are highly successful too.

But, in 2021, is a video streaming platform the right business model? Yes, only if your platform is based on blockchain and 100% decentralized.

Decentralized social media will be the buzzword in the upcoming years. Similarly, decentralized video streaming and sharing sites will be on the rise. This is because existing platforms face an awful lot of issues, and only such decentralized platforms can come to the rescue.

The main issue with the current video streaming and sharing platforms is the presence of centralized servers. Videos uploaded by global users are stored on central servers and the cost of maintenance is huge. Beyond costs, if the central servers get hacked or suffer from a common outage, the entire network will be affected. So, with the rise in population and userbase, a centralized video sharing and streaming business model will not be profitable.

Users don’t get to control the rights (or) advertising preference on the videos uploaded to their channel. Irrelevant ad clips sometimes tend to distract the user from watching the video. So, video streaming platforms have become more of a monetizing tool rather than offering value to users.

Though platforms like YouTube fight hard against copyright issues, most of the videos are replicated in other sites/platforms without giving credits. This continues to be a major shortcoming that hampers the growth of the creative community.

Blockchainappsdeveloper, the blockchain development company, has been offering decentralized video sharing and streaming script to entrepreneurs. It is completely based on blockchain. There’s no central authority to control the system, as the entire system is permissionless. Such decentralized media platforms will be revolutionary in the upcoming years.

1. No central node of failure

Since every node (users) are interconnected, and there’s no central data storage, there’s no room for system failure. Even if one node gets affected, the other nodes are not affected, and the system keeps running.

Since the entire network is based on blockchain, the details of every video uploaded will be stored on the public ledger. The advanced encryption protocols prevent users from downloading the videos and using them for their purposes, without any legal agreement.

In addition to all those basic features, if smart contracts (the pre-coded mutual agreements that execute functions based on the conditions) are deployed in your platform, every function can be automated, including third-parties (or) other users if necessary. Smart contracts bring 100% efficiency and accuracy to a system.

The concept of decentralized video sharing and streaming platforms can be elevated to one step higher using tokens as rewards. For every uploaded, tokens can be rewarded. This will popularize the platform, token issuers, and the video uploader.

Since the platform offers utmost security, video uploaders can be charged to further improve the functionality of the system. Such paid models can be implemented into your business.

Along with decentralized video sharing platforms, decentralized messaging apps and other social media can also be launched. In short, famous apps like Facebook, Instagram, Twitter, and WhatsApp can be remodified into their decentralized versions. This will create a huge impact among the people, as it promotes better trust and confidence among users.

The real-time application of IPFS blockchain in a video streaming platform protects the copyrights of artists and other creators, and securely stores the data on the IPFS cloud storage.

Why should you choose Blockchainappsdeveloper for building your Decentralized Video Streaming platform?