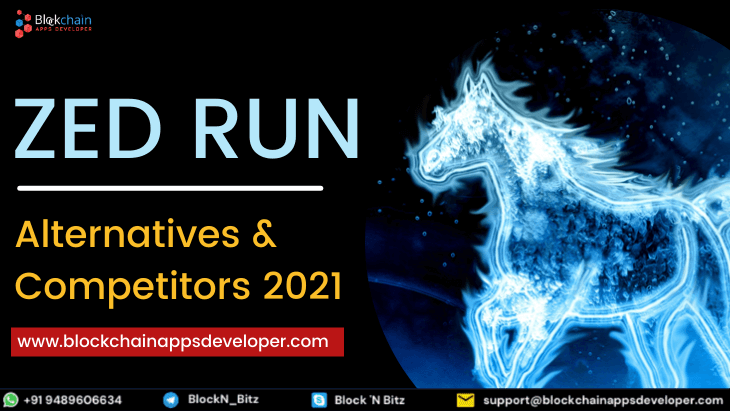 Zed Run Alternatives And Competitors - All You Need To Know!

Get the Best Zed Run alternatives & competitors in 2022 From BlockchainAppsDeveloper. Get Top leading Sites similar to zed.run

NFTs are used to symbolize a horse in the blockchain-based game Zed Run. It is based on the Polygon Layer 2 Chain, which lets users build their own racehorse stable by acquiring them on the peer-to-peer (P2P) marketplace, at horse sales, or through the game's breeding system.

Each horse has its own personality, which means you could wind up with a champion stallion or a stud horse. Building a successful horse and stable takes time, money, and meticulous attention to detail, just like in real life. Zed Run is a completely virtual game. The horses you buy, the studs you breed, and the races you go to are all factors. Except for the money, it's all true.

Get the Best Axie Infinity alternatives & competitors in 2021 From BlockchainAppsDeveloper. Get Top leading Sites similar to axieinfinity.com

Gods Unchained is a play-to-earn strategy trading card game available online. Its trade cards are non-fungible tokens (NFTs) with real-world value based on the GODS token.

Splinterlands is a trading card game that is purely blockchain-based Game. The game features allow users to play and trade with a variety of NFT-based cards. The corporation continuously makes room on the platform for more users. The game has released Alpha, Beta, Untamed, Promo, Reward, and Dice cards, all of which have sold out and it has high demand. It does, however, intend to release a new set of cards that will allow for additional players in the game.

CryptoKitties is an Ethereum-based game where you can purchase, sell, and breed valuable digital cats. It was an early and well-publicized example of non-fungible token (NFT) technology in action. CryptoKitties is a card-based trading game similar to baseball cards or Magic: The Gathering that was created to introduce new users to blockchain technology in a fun and gamified way. Every CryptoKitty is a one-of-a-kind NFT that is coded according to ERC-721 token specifications and has a set of "genes" that govern its look and may be passed down through the generations by "breeding" CryptoKitties.

Tron Village is an economic approach that allows you to earn a Tron coin. As a member of our project, you will be able to run your own business - acquire and build your own profitable output. There are six factories in the game, each with its own cost, profitability, and payback. Each factory earns coins, which may be swapped for the Tron cryptocurrency. Create your own unique strategy for the village's development, increase output, and earn real money!

When you buy an island (which isn't required), pirates will transport you to it and drop you off on the shore. Owners of islands must clear land and create roads for settlement, as well as explore the island, uncover treasures, and gather resources. Players must initially secure shelter, food, and water, as they are the game's most fundamental requirements. In order to house any new citizens until they are able to purchase land and establish their own dwelling quarters, additional community shelter will be required.

Eggies World is a well-known online game built on the TRON blockchain. Every participant in Eggies World has a large chance to collect TRX tokens as a prize for possessing a unique monster. To become a living monster, the egg must be hatched.

In Eggies World, a game platform, players must pay close attention in order to transform an EGG into a monster. An EGG might take anywhere from 1 to 2 weeks to hatch. After an EGG hatches into a monster, the player must feed it in order to keep it alive.

Dragon 7 has teamed up with a traditional casino game development house to provide the blockchain community online classic casino games. Dragon7 aims to bring together like-minded Microgaming players from around the world, bridging the gap between the gambling business and the blockchain community. The basic blockchain gaming technologies, such as play mining, token economy, campaigns, and events, will be preserved in Dragon 7, but regular casino games will offer jackpot prizes and VIP treatment. Come in and play conventional casino games with a bitcoin twist right now!

What Influences People To Look At Alternatives For Zed Run Game?

Surfing for Zed Run alternatives does not imply that Zed Run was not up to par; there is no doubt that Zed Run is a fantastic gaming platform, but certain factors lead gamers to consider other options that provide a similar gaming experience to Zed Run. Because only WETH is supported on this platform, other crypto investors are exploring alternatives. Existing gamers may be dissatisfied with certain rules and norms.

The NFT business is dominated by NFT Games platforms, and we've seen the phenomenal expansion of popular NFT games in terms of trading volume and market capitalization. As a result, many cryptocurrency traders are eager to launch their own gaming platform.

As the best NFT gaming platform development firm, BlockchainAppsDeveloper offers a wide range of excellent services, including the Zed Run Clone Script, which closely replicates the features and functions of Zed Run.