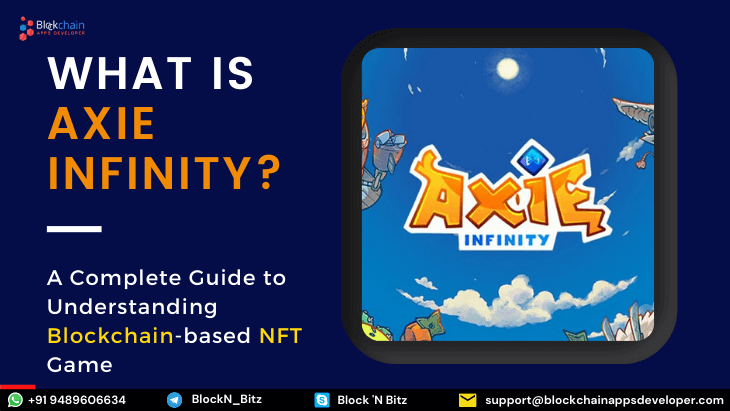 What Is Axie Infinity? - A Complete Guide to Understanding Blockchain-based NFT Game

The Axie game recently blew up, attracting more than 1 million daily players in August, up from less than 500 in July of 2020. Want to know details about "What is Axie Infinity? and What makes it so important?"

The Axie game recently blew up, attracting more than 1 million daily players in August, up from less than 500 in July of 2020. With a market capitalization of more than $2 billion (as of writing) and projected revenues of more than $1 billion this year, it is safe to say that Axie Infinity has achieved staggering success. Want to know details about "What is Axie Infinity? and What makes it so important?"

What Is Axie Infinity (AXS)?

Axie Infinity is a popular blockchain-powered NFT game that was inspired by the successful Pokemon game series. Axie features an open-ended, significantly flexible gameplay that permits players to collect various digital pets called Axies, which can be raised, battled, and traded via the ever-expanding Axie infinity ecosystem.

As of August 2021, Axie Infinity is currently the top most popular Ethereum-based gaming DApp by weekly on-chain volume and also the three most popular gaming DApps by player counts — with over 100,000 unique weekly game players.

The Axie Infinity Gaming platform is designed to offer a fun, accessible, and educational way to get more exposure to the capabilities of blockchain.

Already been successful in executing this ultimate game vision, as Axie Infinity is now a prominent on-ramp to the blockchain-powered industry in various developing countries.

What Are AXS and SLP?

There are 2 main digital tokens used in the Axie Infinity ecosystem.

Mystic Axie is a variant of the original Mystic Axie, which is rare.

As of August 2021, the Axie Infinity token is mostly used for breeding new Axies. including:

Axie Infinity holders will soon be able to stake their digital tokens to get a proportionate chunk of the Axie Infinity inflation. This use case is scheduled to launch in 2021.

Axie Infinity is designed and developed to transition to a decentralized oriented governance model, which sees Axie Infinity stakers take over decisions surrounding the platform development.

How Does Axie Infinity Work?

Each Axie has 4 different states:

Each of these plays a significant role in Axie's war mechanics since they decide how much damage the mentioned Axie can take, who attacks initially, and how much damage it can manage and come out, etc.

Stats of Axies:
Each Axie has four different stats. HP, Morale, Skill, and Speed are all included. What they do is as follows:

HP - HP stands for Axie's Health. The maximum amount of damage your Axie character can endure before passing out.

Morale - Morale increases the risk of a critical strike, as well as the chance of entering the last stand and increasing the number of last stand "ticks."

Skill - Axie's capacity to use multiple cards (combo) at once is defined by the skill. It is automatically determined based on the type of card used for attacks, and these can transmit extra damage to the opponent.

Speed - Turn order is determined by speed. Axie players that are faster attack first, if the speed of two Axie players is the same.

The following is how the turn order is determined:

Play-to-Earn: How Does it Work?

Axie Infinity has helped to define a new NFT based game genre, known as the play-to-earn business concept since it allows game users to earn an income in the form AXS (Axie Infinity Shards), SLP (Smooth Love Potions), and items just from playing the NFT game.

What Is A Scholarship In Axie Infinity?

The play-to-earn digital characteristics of Axie Infinity Game have even led to the formation of the Axie scholarship economy, which essentially sees well-heeled game players, called as Managers, lend out a team of 3 Axies to workers, called Scholars.

As a final result, Managers must ensure that their Scholars are not breaking the rules and regulations — or risk getting their Axies either permanently/temporarily blocked from engaging with the Axie game.

Most of the Blockchain-based users who make money through new concepts and entries of NFT platforms will surely know the impact created by Axie Infinity, thus without hesitation, they will opt for our Axie Infinity Clone Script.