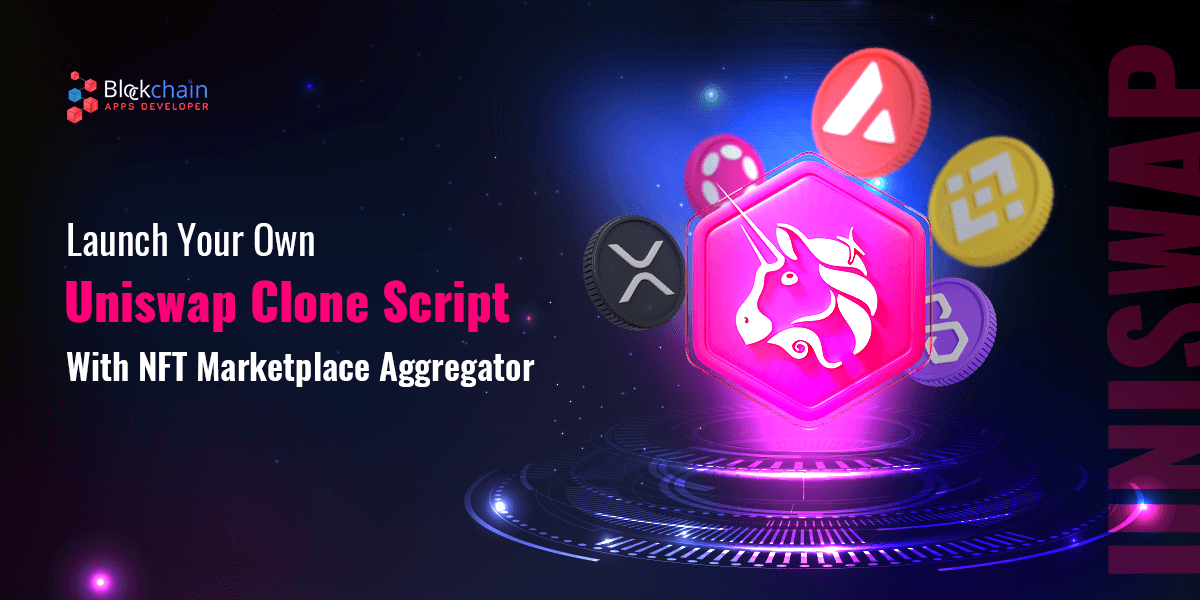 Launch Your Own Uniswap Clone Script With NFT Marketplace Aggregator

Table of Content
Decentralized Exchange Uniswap has launched its own NFT marketplace aggregator. DEX experts and developers have shared the assertion that this tool will help users save up to 15% of their gas fees while shopping for NFTs.
In recent times, you have heard about the news of Instagram turning into a social NFT Marketplace. NFT users have grown vastly in the last few years, and the significance of the NFT Marketplace has made many organizations create their own NFT Marketplace. On November 30, Decentralized Exchange (DEX) Uniswap announced that users could trade Non-fungible Tokens, or NFTs, inbuilt into its native protocol. In a recent post, Uniswap said that this function would commence featuring  NFT collections for sale on platforms including OpenSea, X2Y2, LooksRare, Sudoswap, Larva Labs, X2Y2, Foundation, NFT20, and NFTX:
“To bring users the first-rate experience they’ve come to expect with Uniswap, we built the aggregator to deliver better prices, faster indexing, more unassailable smart contracts, and efficient execution.”
Uniswap developer guarantees that users and finance participants can save upwards of 15% on transaction gas costs. Uniswap NFT aggregator lessens the gas fee compared to other NFT aggregators. It consolidates ERC-20 and NFT swapping into a single swap router. Uniswap NFT facilitates the users to exchange multiple tokens and NFTs in one swap with the integration of Permit2, resulting in low gas costs.
The universal Router smart contract ignites the Uniswap NFT aggregator,  and UX smart contract Permit2 optimizes the NFT aggregator. These two Smart contracts are Uniswap inventions. As reported by DEX, it “unifies ERC-20 and NFT swapping into a single swap router. Integrated with Permit2, users can swap multiple tokens and NFTs in one swap while saving on gas fees:”
“We originally conceived Permit2 and Universal Router to improve our own products, optimizing gas costs, simplifying user transaction flows, and strengthening security. As we ideated, we realized that other applications could greatly benefit from integrating these contracts.”
As a mode to boost the launch effort, based on a wallet snapshot on April 15, 2022, Uniswap has airdropped around 5 million USD Coin (USDC $1.00) for particular historical users of Genie NFT aggregator, and this offering gas rebate is for the foremost 22,000 NFT users. This gas reimbursement offer will conclude after two weeks and caps at 0.01 Ether (ETH $1,234)
As a renowned Uniswap Clone Development Company, we help you build the immaculate replica of DEX Uniswap that imitates precise functionalities. You can also create the undisputed Uniswap Clone Script with the showcasing NFT Marketplace Aggregator. BlockchainAppsDeveloper is endowed by well-versed DEX experts and developers, who will help you build Uniswap Clone Software in no time.