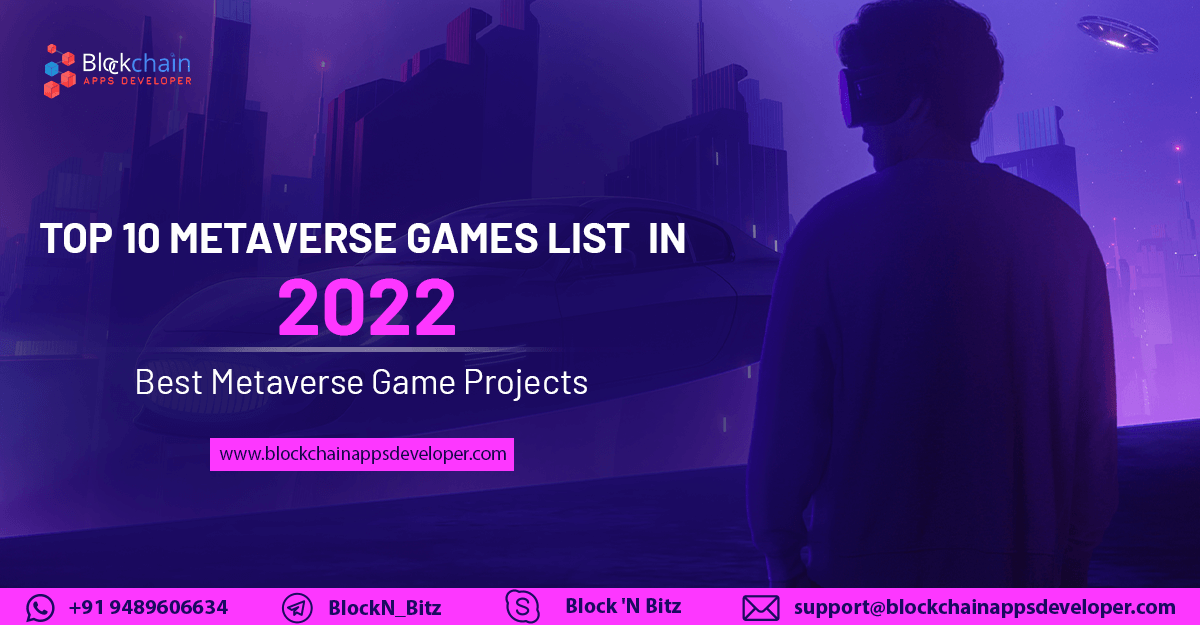 Best metaverse games in 2022 - Top blockchain based metaverse NFT game projects details from Blockchainappsdeveloper. The term "Metaverse" has achieved a higher position in recent years. The cybercitizens entitled the Metaverse as 'technology of the future economy'. The Metaverse indeed plays a crucial role in the Digital World. Metaverse has its outstanding evolution in the Online Gaming industry. Our predecessors or aged gamers will never understand when we define Metaverse Games to them. Even some modern netizens don't have any notion about the Metaverse. Metaverse is the 'tomorrow' of Online Gaming and Business.

Metaverse is the supreme combo of Virtual Reality (VR) and Augmented Reality (AR), which produces an incredible universe, which is an Extended Reality of our real world. Since the creation of the Metaverse Platform, many game development industries have been delivering Metaverse versions of their original games.  For example, Epic Games is the creator of Fortnite, a multi-player shooting game released in 2017. It has evolved into a digital events place where users can attend dance parties and virtual music concerts.

Real people can use the Metaverse games and applications to descend into the 3D Virtual World. They can interact with their friends. Metaverse is mainly based on communication consensus between the users. They can portray themselves as avatars, they also have attributes to create items and sell or buy them.

The Metaverse creates a blend of games, virtual reality, live-streaming, cryptocurrencies, and social media, as players move across an ecosystem of competing products. Online games and businesses provide many possibilities for users to earn. Most importantly, Metaverse games do not have pauses, game overs, or resets, things will occur in real-time. Now we can see the top ten Metaverse games of 2022.

y in 2018. This game was inspired by Pokemon. It portrays the surrealistic creatures called Axies, Players can breed, raise, collect and trade them. They can also declare war against other Axies, they can pursue treasure. Like the real world, they can buy land and build homes for Axies' accommodation. The Axies are virtual pets, which have the value of non-fungible tokens value in it.

Decentraland is the Virtual Reality game where you can create avatars, buy wearables and attain real estate land consisting of over 90,000 different land plots. As a landowner, you can rent out your land to others. It can be any place like houses, hotels, parks, cinemas, and casinos. You can earn income by organizing a show and selling tickets. You can sell digital art by placing an online auction.

This is a user-generated platform where users are depicted as block-like customizable avatars.  The Sandbox game involves three main products, VoxEdit is the first product-making tool, you can create 3D avatars, vehicles, plants, animals, tools, and other objects. The second act takes place in the marketplace, where you can sell your exported items. The final product is the Game Maker, which allows you to develop games without coding.

It's an upcoming game, which describes as a "true triple-A, 3D blockchain". This game consists of an alien landscape, where you have to capture a celestial creature called illuvial. You have to hunt them and aid them back to healthiness. Illuvial will help you battle other players and monsters. They are also tradable NFTs, you can earn rewards in the form of illuvium crypto after winning the contest.

Chain of Alliance is a role-play fantasy gaming multiverse, where you can battle against other players. To grasp the winning opportunity, you have to choose one of the best players from your eight-character team and arm them with your effective weapons.

My Neighbour Alice is a multiplayer blockchain builder game, where anyone can purchase and own virtual islands, collect and build exciting assets and meet new pals. They can cultivate their agricultural plots. The game narrative is similar to Farmville, where you can grow crops and livestock to breed. All the assets such as plants, animals, houses, clothes, decor, etc are tradable on the Alice NFT Marketplace and other blockchains.

Krystopia is a space adventure game, puzzle and maze lovers will relish this game. You'll be recreating the role of Captain Nova Dune, you have to play accordingly to the first-person narrative. Captain Nova Dune is a space explorer, who departs to planet Krystopia after receiving a bizarre signal from it. The main plot revolves around the Captain and her alien pet Skrii.

Alien Worlds is a play-to-earn game built on the WAX blockchain. It features a universe of six planets, each consisting of 500 land parcels. These lands are possessed by players and represented by an NFT. The mission for the gamers will be mining the Trilium from the lands of the six planets. You can also buy your land and mine TLM from the ground.

Farmers can farm Gold and NFTs by mining and playing within the Farmers World. Farmers World is also a play-to-earn farming blockchain game, where players can earn FWF, FWW, and FWG tokens and own NFT items on the WAX Network. Every yield from your harvest can be sold or bartered to other players. You have to safeguard your land from burglars, who can steal your resources.

This epoch game will take you to the 19th-century Wild West. You can explore the Western Spaghetti version of Digital World and the ultimate destination of the game is to acquire the gold that you can reclaim into game currency. You'll receive three laborers to toil for you. You can build your mine and start drilling with those workers.

The Top and Best 10 Metaverse Games to Play to Earn(P2E) in 2022 are listed above. We 100% believe that by 2022, these metaverse games will have definetly dominated the Metaverse business market and therefore will continue to grow in the upcoming years ahead.