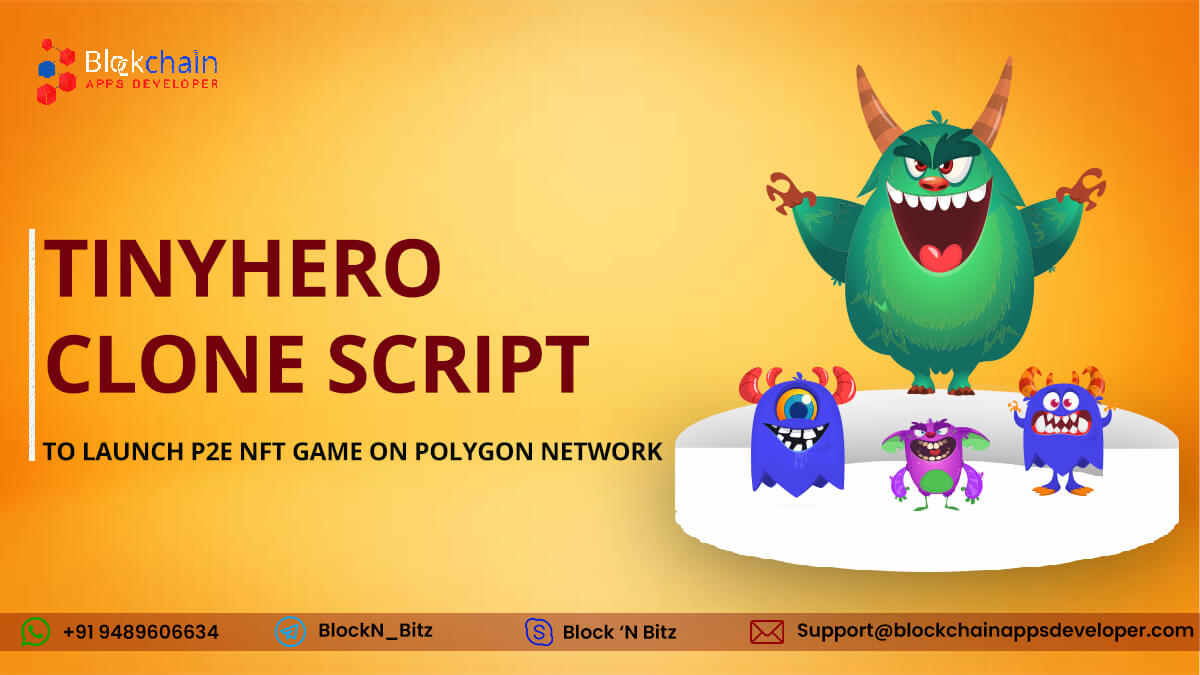 BlockchainAppsDeveloper Provides Tiny Hero Clone Script To Start NFT Game and Marketplace Platform Like TinyHero. Tiny Hero Clone Software from BlockchainAppsDeveloper will make you earn more cryptocurrency with this NFT game you play online as these days are popular with NFTs & marketplaces for easy earnings. We will help and assist you to create a robust NFT Marketplace Gaming platform with our TinyHero Clone Script to meet your business expectations.

Our next successful stand is with our top-notch Tinyhero Clone Script that enables you on a tower defense gameplay which makes you stand against the heroes by protecting the treasure for earnings. Now at every match, a player can have three characters in a team from the heroes they own, at the same time the match will automatically give the player experience points (XP). Every player is eligible to upgrade their characters to higher levels only after they fetch enough Experience Points XP.

Why Start Your Own NFT Gaming Platform with Tiny Hero Clone Script?

The NFT game clone script we provide you will be the most prominent gaming platform to balance your business with profits on trades. TinyHero game is the highest rated game on the NFT marketplace as it generates more interest among the crypto users who want to make money while playing with their own TinyHer Clone Script.

Features of Our TinyHero Clone Script

This is an exciting platform for players to customize their environment through a seamless and hassle-free gaming experience at all time. It will allow the players to fight against the monsters with a success rate of 80 percent, collecting Extra XPs on each round of combat only when they acquire an NFT. The prices are consistent for each player as the game is based on real-time PvP after completion of a specific stage/round of fight on the blockchain network.

The special thing about the TinyHero is, all $TINY will be burned once they are used to buy NFTs and the breeding won't cost you any fee of transactions. While you play the game even luck will also play for you to breed a brand new valuable and powerful NFT.

To have a stronger NFT by upgrading it with the Extra XPs and TINY accumulated from every fights.

Hero - the vital elements of the TinyHero gameplay even in a game of PlayerVEnvironment or PlayerVPlayer.

Strength: For Guarding and fighting against the others in a battle or for defending purposes, Strength Heroes perform strongly to withstand by easy recovering and regenerating than other heroes.

Agility: These heroes differ from Strength heroes as they deal with powerful stand by using techniques and the skills of mastering the weapons in attacking and defending.
These heroes are mostly used in the play as Ganker roles because of their scalability.

Intelligence: Intelligence heroes have larger Mana pools because of their spells and ability mastery. These heroes are not regularly used but in times for helping the allies and by harming the enemies.

Hence, these Heroes have one of three primary functions: Strength, Agility, and Intelligence. The Hero's attack damage is increased by every point added to the primary attribute.

Heroes are classified into 3 levels of Rarity

The higher base attributes of the heroes are based on the higher level of Rarity and while they level up, the points will be increased higher.

To randomly own a TinyHero, players can purchase Eggs and this way is totally different from buying TinyHero directly. Purchasing eggs will give a 50-50 chance of both failure and owning higher types of Hero.

Staking TINY NFT can be staked to earn MATIC from the ecosystem but only at Level 2 the NFTs can be staked. You can receive or share more rewards from the power added on staking.

On a PlayerVPlayer gameplay, the players are enabled to fight each other with a team of 3 of their collections and will gain TINY also from EXP.

TinyHero is game where you can play to create a powerful team to battle against other players. Now this interactive gameplay will make you earn TINY! as this is the first ever P2E game with Auto claim and Auto Reflect protocol. The Tinyhero game works on a module wait a unique auto-claim feature as $TINY is the largest MATIC token on the Polygon. This game is inspired by Safemoon and Tikitoken where it brings awareness about HODL and RFI as an exclusive higher level rewards.

A very easy gaming protocol designed to earn $MATIC starting from playing games to earn $TINY and Hold them to earn your $MATIC, in a simplified and attractive method.
A simple formula can determine or explain you what TinyHero is,
TinyHero = SafeMoon + Axie Infinity....!

TinyHero also enables a fantastic gaming experience with a Blockchain-based real-time player versus player and a PlayerVEnvironment as a next generation P2E model.

BlockchainAppsDeveloper the leader in Blockchain Application Development, enormously achieved many claims as the best NFT Game Development Company. We will help and assist you to create a robust NFT Gaming platform with our TinyHero Clone Script to meet your business expectations.

You this precious opportunity for your business with us by customizing the functionalities and the features to your own platform to own a massive income of revenue.

Disclaimer: We use the term "TinyHero" for readers to quick understanding purpose only. Our services are not meant to influence any entity.