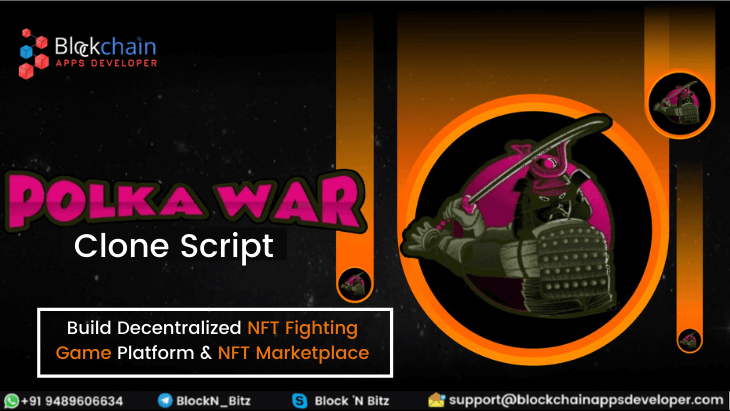 Polkawar Clone Script is a clone designed to develop an NFT game that plays traditional battle and betting built on a Decentralized Blockchain network. With this exciting and thrilling fighting game you can, From the battlefield you can use the NFTs to increase the mana of it - Increasing the Gain Value of NFTs by trading with another user by minting the game characters, equipments, and the used battle weapons in the form of NFTs.

BlockchainAppsDeveloper offers many NFT game clone scripts over many blockchain networks like Tron, Polygon, Solana, BSC, Ethereum etc thus being the Best NFT Game Development Company. You can develop and design your favorite fighting game with our Polkawar Clone Script fully functional by our team of Blockchain Game Developers offering you customizable options meeting your requirements.

Polkawar NFT Marketplace Clone is designed in such a way were the players can buy the characters involved in the game also with the weapons to be used in the battlefield.

There are many useful reasons to trust and opt for a Polkawar NFT Marketplace Development can be easily decided with just one good value it has. This NFT Marketplace will be a center of huge collection of NFTs that can be traded between the users and admins.

These trades can happen anywhere in the same smart chain because of the metadata of NFTs that can be traded outside the platform like OpenSea.

Why Polkawar Game stands UNIQUE? - Feel the real NFT on your Hands by purchasing the equipment and weapons to get shipped if you wish to get the physical form in real time.

How the Polkawar Game Clone works?

This Polkawar Game Clone will work on different attributes executed in the smart contract that combines with the gameplay that fluctuate in real-time. The game is fully implemented on a concept of logic that initiates the battle between two players who hold the closest properties that can be anything. The competitor or the player is chosen with a simple logic of "First Come First Serve" basis.

Now, you may have a basic question that will arose in everyone's mind like, if no competitor is chosen from the first come basis, then how will the game move further?. The answer is simple through its operation by locking the bet value of USDC  in the system and will further notify the player while the battle between a and b goes on field thus to find out the winner by comparing their properties using the game formula implemented in the smart contract.

These will work automatically if no competitor is available and will determine the battle end with the winner who gets all the USDC collected from both parties which is secured through Escrow.

As mentioned before these contain different type of attributes that is based on 3 characters.

Also these attributes will transform the whole game into a trade marketplace with its NFTs involved and classified into 3 categories such as,

But these equipments are limited to a character for wearing it on the same time:

The only thing is the Magician character can use both the Magic Vase and Sceptre.

The native token used in Polkawar NFT game is "PWAR" that is based on blockchain network. This token is used for many beneficial features of the following:

Farming: Get rewarded by using the token so that the liquidity providers can easily earn more profit by locking its tokens.

Staking: By staking the PWAR Tokens, the users can earn more tokens and can level up the equipments.

Marketplace Fee: The PWAR tokens should be paid as a fee to sell your NFTs on the Marketplace which will be used for the ecosystem development by burning the tokens.

Renting Fee: This is a useful feature especially for the "user engagement earning program" by allowing the users to lease their own characters on an NFT renting platform. The leased characters can be used by others for the battle while the users get paid a fees in exchange while they are out of mood for playing.

Governance: The holders of PWAR token can participate in the governance process that determines one's growth in regards to revenue on a decentralized platform.

Earn & PLay: If you are an user, earn PWAR tokens by playing the game battles.

Buy ITEMS: You can easily purchase game items like weapons and equipments by using the PWAR and exchange them to physical assets.

We are the Leading NFT Game Development Company, which helps you to quickly establish a highly secure blockchain-powered NFT gaming platform with top-notch functionalities and features to your specific business needs.

You this precious opportunity for your NFT Gaming business with us by customizing the functionalities to your own desired platform to own a massive income of revenue.

Disclaimer: We use the term "Polkawar" for readers to quick understanding purpose only. Our services are not meant to influence any entity.