Home > Blog > Cryptocurrency MLM Software > Why Should You Build Smart Contract Based MLM Platform on TRON Network? - A Step by Step Guide 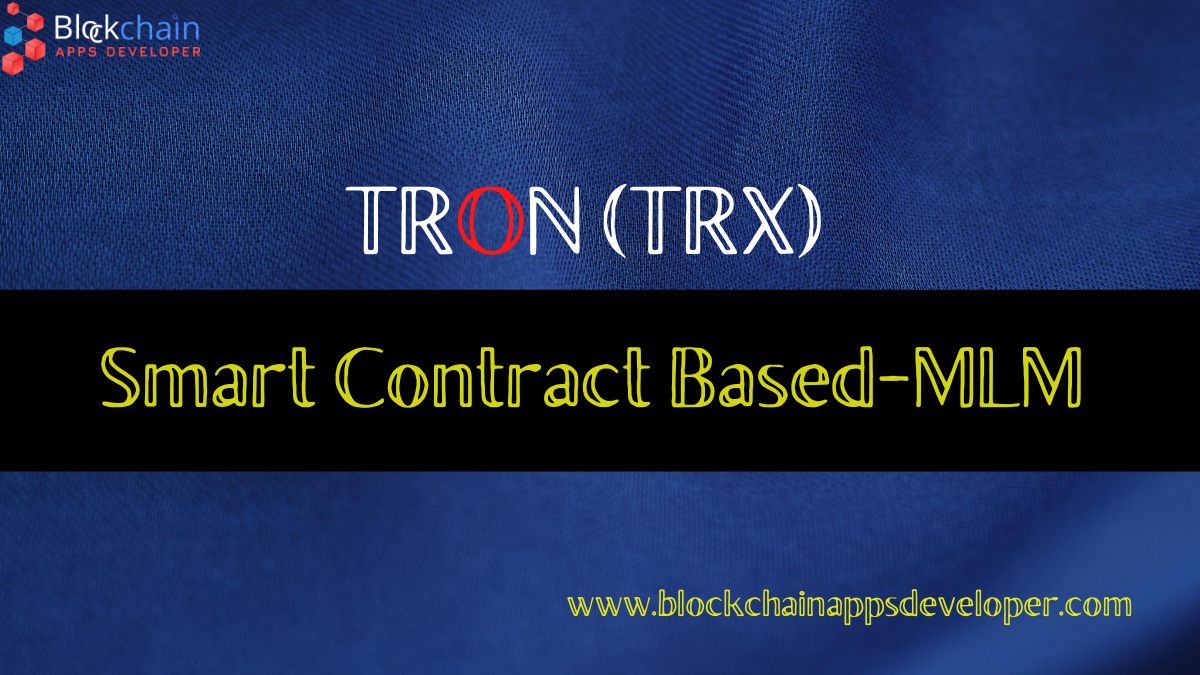 Looking forward to start your earnings in a decentralized application network like TRON? Nevertheless, you are at next door that can definitely boost your earnings as we BlockchainAppsDeveloper generously give our helping hand for the users who show interest in building a Smart Contract based MLM platform on the TRON network.

Before getting into this article I just want to put forward a simple question to you. Just ask it to your self and think about it. Okay.

Do you feel like you are in the middle of the puzzle while you are researching about the concept so-called as "TRON network"? Probably at some point in time, you might be elated if there is strong support to guide you. We are here to instruct you by giving the appropriate reasons and guide for the ones who are eagerly waiting to launch a Smart Contract based MLM platform on the TRON network. Without much further ado let us get into the concept.

What is a Smart Contract?

Guys, likely it will be better if you have good knowledge of the topic widely known as "Smart Contract". So, a smart contract is an agreement between two people in the form of computer code. It runs on a blockchain (public ledger) a database that holds all the transaction records that cannot be modified once after a Smart Contract is launched.

Here the Smart Contract connects with the blockchain network instead of an API connecting to a single database. So multiple nodes (large network of people) are involved instead of a single host computer, which in terms more or less warns you that your decentralized network must be unhackable & less susceptible to different vulnerabilities or attacks.

As the multi-level marketing platform gives you a good source of income & business opportunities definitely never miss it out if you are aiming to start a Smart Contract MLM business of your own.

Popularly DApps is known as the decentralized application and by the way as per its name suggests it does not execute on the centralized machine. More or less Smart Contract and DApps does not have much difference, as the DApps uses Smart Contract that perfectly runs on the blockchain technology.

TRON is a decentralized application platform where the people from nook & corner of the world can build their own free, digitalized content entertainment system globally. Its main intent is to build a decentralized P2P media network across the globe. As it uses distributed storage technology that stores the data across multiple physical servers, the DApps can easily crawl the information from the blockchain that the end-users are in need of. Data fetching from the blockchain is absolutely easy and quick.

Let's have a small brief intro about basically how a TRON network (familiarly known as TRX - Troinix official cryptocurrency) is started.

In September 2017, the Chinese entrepreneur "Justin Sun", founded TRON. The dedicated Tron foundation eliminated the need for the middle man and acts as a bridge between the content creators & content consumers. Audiences across the globe can pay directly to the content creators if they want to get access to it. Absolutely by doing so, it is considered one of the cost-effective ways as the Tron network runs on a decentralized storage platform.

How does the TRON network function with a Smart Contract?

First and foremost Smart Contract needs to be written and then it should be deployed to the TRON network. The Smart Contracts supports the Solidity language (Object-oriented programming language) Our expert developers in the BlockchainAppsDevelopers, provide these features while writing a code for the Smart Contract. Currently, solidity language version 0.4.24 ~ 0.4.25 is widely used by the programmers.

Talking about the TRON network you must definitely know what the gas fee means. The gas fee is a transaction fee that is carried out by the miners who process your transaction in the blockchain.

Step by step procedure to build a Smart Contract with TRON network?

2. Connect your Smart Contract with DApps
As we are talking about TRON (Decentralized application) its should be connected with the smart contract with the help of a TronLink. It is available in the form of a chrome extension. Just install it to your device for deploying your smart contract with your TRON network.

TronLink instructs you to set a wallet password for security purposes. Before getting started to it you need to have TRX coin. In the Shasta website give the wallet address that you have created in TronLink. By doing so you can get 10,000 TRX token for development purposes.

3. Deploy Your Smart Contract
One of the best ways to deploy smart contracts is by using TronBox. The TronBox has a javascript file basically known as tronbox.js. These files says about the individual's node and event server is connected with each other. The parameters in the file also say about the private key to access the TRON wallet. Once after the code in the smart contract is compiled it can be deployed on the TRON network.

4. Integrate TronLink with smart contracts
After having a smart contract code in the js file, the account address of yours in the TronLink should be linked to the smart contract that is deployed. At last, you have to install dependencies like $ npm install and $ node index.js to finish the final part of the deployment of smart contract in a Tron network.

While trading on a decentralized network, the secured & safe wallet is always considered as the top priority for storing your crypto coins. Here the TRON foundation promotes their wallet to be extremely secured as it uses TRX coins (price $0.02906282). Some of the well popular wallets are TronLink, Tronpay, Tronscan, etc...

Some of the major points I would like to highlight about TRON are listed below:

1. TRX - Troinix one of the major cryptocurrencies that can be bought on the major exchange platform like Binance.
2. Earns more TPS(Transaction process system) than Ethereum & Bitcoin.
3. Handles 2000 transactions per second.

Why Choose Us for Building your Smart Contract based MLM on TRON Network?

Our expert developers in the BlockchainAppsDeveloper have excellent skills in smart contract & blockchain development by providing services all over the world. Some of the valuable reasons are listed below that makes you to choose us are: