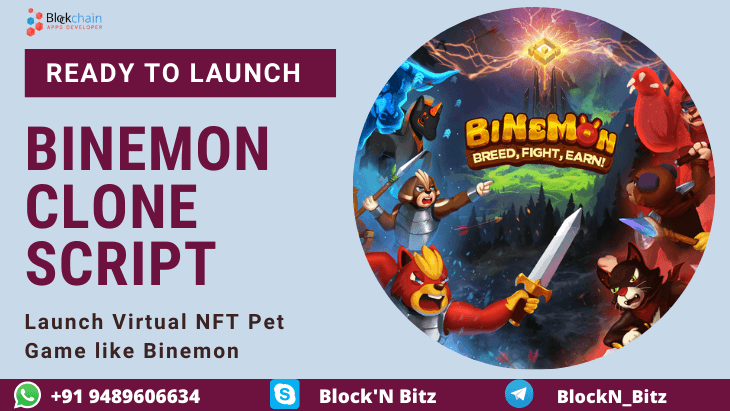 Binemon Clone Script is a readymade Virtual NFT Pet Game website script to start an NFT game similar to Binemon. The Binemon clone script is a latent role-playing game in which players acquire and trade eggs, land people, and other commodities.

Binemon Clone Script is a readymade Virtual NFT Pet Game website script to start an NFT game similar to Binemon. The Binemon clone script is a latent role-playing game in which players acquire and trade eggs, land people, and other commodities. They can fight and win battles just like they can on other gaming platforms. You can give your users the greatest gaming experience possible in an NFT environment.

Features of Our Binemon Clone Script

Binemon depends on Draken Chain to provide its players with a fun gaming experience. DRK is a decentralized blockchain platform for the next generation. Proof of honor, which uses HodgeRank to rank nodes based on the quantity of stakes and transactions, improves the DRK chain's efficiency while retaining high transparency and decentralization, and builds on proof of stake's great accomplishments.

However, the linked protocols aid in the development of decentralized applications like Gas stations,  Smart contracts, and DRK privacy-On-demand anonymity.

DRK is the Draken blockchain’s native coin which you may earn by breeding, selling pets, and winning battles in Binemon. This DRK can be traded for cryptocurrency in the future. Since there is an in-game item called Ambrosia (AMB) which works similarly to a Pokemon Pokeball in that it allows you to develop mon eggs while also providing a benefit that makes them rare.

Benefits of Our Binemon Clone Script

Binemon clone is a virtual pet NFT game with RPG aspects that allows users to gather and trade their eggs with other players. The term RPG which players advance through missions and various side quests. For the same, their characters will earn additional attributes and power. In Binemon, the players can fight on both the PvE and PvP modes and earn their cryptocurrencies.

Binemon clone is a story that takes place on five different planets: the desert, fire, wood, ice, and water. The players should assemble an expedition team of creatures with whom they would conduct the mission. Based on their class, rank, and race, these creatures are divided into distinct teams.

When alien entities emerged and created lookalike species, they were dubbed mons, and their objective was to use their extraordinary power to destroy the world. A mon is made up of ten elements that combine to make it more powerful and strong. This is what the players may show off their abilities by appropriately organizing the mons and pricing them in the NFTs.

They will begin earning rewards after they have formed a squad. They will earn eggs, stuff, ambrosia, and lands by working together. They will become stronger at every stage of their game as a result of the awards they receive. These things can be traded for DRK currencies as NFTs on the marketplace.

Binemon has achieved notable achievements in the commercial world, demonstrating its potential to compete with traditional gaming platforms. The gamers clearly immerse themselves in the Binemon digital realm as seen by the rise in global audiences.

Some of the high points of Binemon are,

The website sold roughly 150,000 NFT in Binemon on its first day of existence, allowing collectors to obtain characters like "Mons."

Binemon is the first NFT Game to make the software available on both iOS and Android, which no other NFT Game has done previously.

Binemon offers two fantastic PvP and PvE features that let players compete against one another for prizes and benefits.

The game has generated 63,000 users over the last 10 days, with over 670,000 everyday transactions on the DRK Chain. This implies Binemon is well-known in a large number of populations around the globe.

BlockchainAppsDeveloper - a leading NFT Gaming Platform Development Company, we can assist you in creating a custom Binemon clone script with all of the features of the original software. Our Binemon clone development service provides you with highly scalable and optimized business solutions. So far, we have completed a number of NFT gaming projects around the world.Get the greatest Binemon Clone Script from us, which is ready to use right away!

Disclaimer: We use the term "Binemon" for readers to quick understanding purpose only. Our services are not meant to influence any entity.