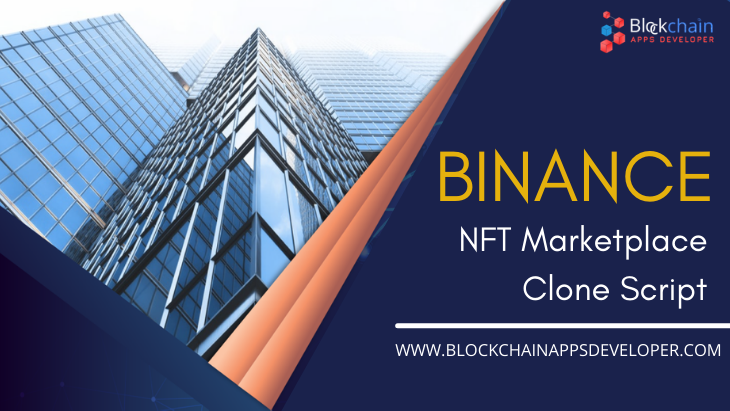 Binance NFT Marketplace Clone Script Features are not only the components in making the user experience and interaction wider but also comprising many noticeable features that really make everyone develop and connect with the Binance NFT marketplace. The individual component in the platform makes accessibility easy and simple.

Yet, some of the exclusive features are;

Reward - Award: This feature is nothing but kept to create exposure among the people in the NFT marketplace. Having a separate section of "rewards" for the user while making successful transactions on every trade makes them repeat and engaged.

Finest - UI: With the best User Interaction and experience, the person can have the win in the trade. The NFT marketplaces developed by us will give you the finest accessibility anywhere in the application.

Low for HIGH: No matter what high transactions are you into, the processing fee is just 1%.

Easy find: This is a basic feature that has been developed for the best user experience in order to eradicate the state of confusion while searching for the assets, which is simplified and sorted understandable in the listings.

"Having anything without a brand is like living without a Land", Binance had a long way to succeed and became popular by its "low cost fee" for the transactions made between exchanges and trading. Thus, it is still a successful brand by promoting another major feature, "BNB token" which is being used by the users anywhere within the Binance ecosystem.

Now, with all this popularity, Binance launched its NFT Marketplace to ensure and attract the audience's trust in engagement. In the Crypto world, Binance smart chain has many benefits for the NFT community in the blockchain which also can be supported by the Ethereum platform.

As we all know that the Non-fungible tokens only rely on the "rare collectibles" to make its stand in the cryptocurrency exchange world running on the Binance smart chain. With the mention of rare collection auction, Binance NFT Marketplace made its premium mode of operation by launching the first series of "100 Creators program" and the "Mystery Boxes".

A strategic move by the Binance NFT marketplace is by bringing the life to the digital art by announcing the debut which features the Andy Warhol's "Three Self-Portraits," which was sold to "Justin Sun" for a whopping "2.8 million dollars" as well as a newly digitized NFT of Salvador Dali's "Divine Comedy: rebeget." as "Genesis" in the title.

How to Start an NFT Marketplace Like Binance NFT

If you are opting for the best NFT marketplace development company then, Blockchainappsdeveloper is the only solution without any regret. As a script cloning fully depends on the security policies and the issues involved in the development, only a genuine and trustable source should develop the requirement of yours that can have satisfaction in the world of blockchain. Thus, it is really advisable to opt for Blockchainappsdeveloper, for your revenue and visibility in the crypto platform.

Binance NFT Marketplace Clone Software is a great demand nowadays because of its native operation running with ease of management and customization which is known as the "White Label NFT Marketplace".

Disclaimer: We use the term "Binance NFT MarketPlace" for readers to quick understanding purpose only. Our services are not meant to influence any entity.

The main use of having or living in a white-label marketplace is nothing but simply a way of portraying of assets from the creator to everyone mingling inside an NFT marketplace. This type of software functionality will make you feel better in interactions within in Buying, Selling, Bidding and also turning your willing digital asset/NFT to a part of Ethereum blockchain as a ledger for the public called as, "Minting".

While you have a Binance NFT clone script is like having the same and the original Binance NFT marketplace as it is the replica/reflection of it availing the same options. It is fully functional in delivering the end-to-end activities performing bidding, buying, selling, and conducting all transactions by listing the digital assets inside the NFT marketplace which is based on the Binance smart chain.

We are ready to give you options to undergo in the selection of development according to your needs,

You can have the option to opt for a fully functional Binance NFT marketplace clone script with some add-on you want to integrate with.

A complete scratch start application can be developed to an NFT marketplace like Binance.

BlockchainAppsDeveloper is the best NFT Marketplace Development Company that has a stupendous name in developing a customized Binance NFT marketplace. Every notable development in demand should have firm reliability and that is where we stand and specialized in creating non-fungible token and a marketplace exclusive for you which never compromises in security with limitations.

We have a wonderful impacting team of skilled smart chain developers who are experienced experts in having a prominent call even from the scratch of the initial planning on the development of smart chain till the satisfied deliverable delivered. The technical team will always hold you with support at any time even when the product is at you and ready to be altered or changed if anything you need to upgrade later.

Hence, if you want to start or to create a Binance NFT Marketplace in order to trade your non-fungible tokens, hold on to Blockchainappsdeveloper for your convenience and fulfill your desired business result.