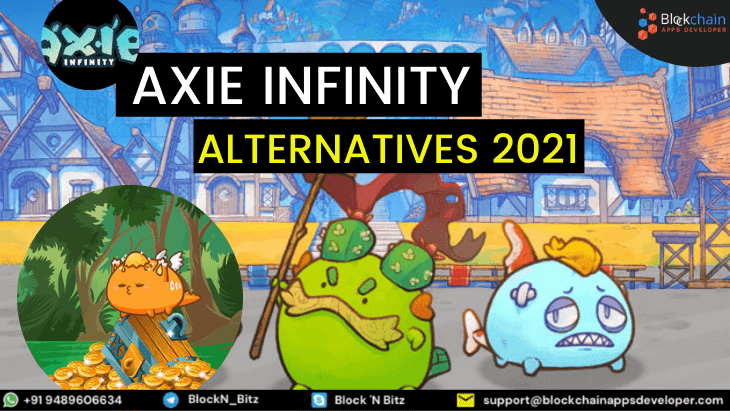 Axie Infinity Alternatives and Competitors - All You Need To Know!

Get the Best Axie Infinity alternatives & competitors in 2022 From BlockchainAppsDeveloper. Get Top leading Sites similar to axieinfinity.com

Axie Infinity is a digital pet community centered around training, collecting, raising, and war battling fantasy creatures called Axie. Each Axie is unique crypto or digital token secured on the Ethereum Blockchain Network. The updated market price is $127.33 USD with a trading volume of $2,035,861,124 USD. The current Ranking of Axie Infinity is #26 with a live market cap of $7,755,262,654 USD.

Get the Best Axie Infinity alternatives & competitors in 2021 From BlockchainAppsDeveloper. Get Top leading Sites similar to axieinfinity.com

ZED RUN is a digital horse racing NFT game built on blockchain technology. Build a legacy by developing a stable of winning digital racehorses. The Zed Run NFT marketplace is a unique trading platform for non-fungible tokens. Any open type marketplace, such as Opensea and Rarible, is used to trade the NFT-like digital horse. Breathing NFTs are the type of NFTs that are generated in NFT games such as Zed Run. These NFTs are built in such a way that they include DNA, which is passed on to next-gen zed or houses via the platform's algorithm. The Zed Run NFT game comes with pre-defined NFTs, each of which represents a unique digital horse that will compete in the blockchain-based digital horse racing game. The Zed Run allows you to breed, buy, and sell digital horses by producing NFT horses, often known as "Breathing NFT."

CryptoKitties is a well-known NFT game. It's one of the first crypto games that has maintained its popularity over time. It was first released in 2017 and is still going strong today. The focus of the game is on gathering and breeding digital kittens. Depending on the rarity and quality of the cats you receive, you can sell them for absurdly high rates. The most expensive CryptoKitty ever sold was a cat named Dragon, which went for 600 ETH (about $172,000 at the time).

CryptoKitties isn't as popular as it once was. This is primarily owing to the rise of rival NFT games that provide additional gaming components and earning chances. CryptoKitties, on the other hand, is still quite profitable today. Kitties are still selling for tens of thousands of dollars, and the market is still strong. Overall, it's an excellent alternative to Axie Infinity.

Decentraland is a Virtual Reality Ecosystem powered by the Ethereum Blockchain that allows users to create, enjoy, and monetize content and applications. The community owns the land in Decentraland permanently, giving them complete authority over their projects. On a blockchain-based parcel ledger, users claim ownership of virtual land. From static 3D scenes to dynamic systems like games, the content can be anything.

Sorare is essentially a fantasy soccer game, except instead of selecting players from a list during a draught, you buy digital trading cards that are tokenized on the Ethereum network. These NFTs cards are yours to keep and resell as digital or crypto-collectibles, but they're also at the heart of Sorare's fantasy gaming world. There are also rewards to be won, including cryptocurrencies and uncommon, precious cards.

You can join a variety of leagues in the game, including a rookie league for amateurs, regional leagues, and even a league specifically for lineups with young players under the age of 23. Once you've joined a league, you can use the cards in your account to create a new lineup each week. The in-game points are totaled based on all of the players' real-world performances at the end of the week, and the Sorare users with the highest points are eligible to win ETH and rare cards as prizes.

Gods Unchained is a new effort into blockchain and cryptocurrency for the game business. It's similar to the free-to-play online trading card game Magic: The Gathering Arena. The video game Gods Unchained bills itself as a "pay-to-play" trading card game. It's upending the traditional model of gaming commerce, in which users buy the game as well as in-game stuff that they'll never be able to sell.

Gods Unchained functions similarly to other online strategy games, with its own currency such as "gold" or "credits." These currencies, on the other hand, take users' real money and convert it for a more pleasant in-game experience. The in-game currency in Gods Unchained is real money. Players can use the game's marketplace to acquire and sell cards in order to construct a deck that will win more matches and gains more cards as they do so.

F1 Delta Time is an Ethereum blockchain-based game created by Animoca Brands in collaboration with the Formula 1  motor racing championship. For collecting objects that can be used in the Racing Game, the game uses both non-fungible (NFT) and fungible tokens.

REV is a fungible cryptocurrency that functions as cash for race day events. It is intended as an ERC-20 token. The REV token can be used to pay for game entry fees to races, as well as to buy collectible items at the races. REV tokens may gain or lose value as a currency as a result of being staked in the race. If the car on which players bet their REV performs well in a race, the race may reward them with REV.

The WAX blockchain integration is the brainchild of WAX, a global asset exchange that creates and offers the safest and easiest way to manufacture, buy, sell, and trade digital items to anyone, anywhere in the world. On the WAX Blockchain network, we offer Splinterlands Clone Script, which allows you to create and deliver a custom NFT-based gaming platform similar to Splinterlands.

Lost Relics is an Enjin Blockchain-powered Diablo-inspired play-to-earn action-adventure role-playing game. The game requires players to explore dungeons, defeat monsters, and find some of the most valuable artifacts.

There are two types of objects in Lost Relics: virtual and blockchain items. The game's marketplace, the Royal Emporium, allows players to sell virtual items and bought with in-game gold. Some objects have a restriction on the number of faults they can have, while others don't. If you die while carrying an item in Lost Relics, however, it will be lost.

The Six Dragons are the world's first open-world RPG blockchain game, and it's powered by the Enjin blockchain. It's BlockPegnio's main DeFi game, focusing on blockchain-driven gaming innovation and play-to-earn mechanics. The Six Dragons is an open-world RPG set in the fictional land of Members with a lot of features. It is set in a 256km2 open world with one billion dungeons and a plethora of surprises. Forests, volcanoes, mountains, rivers, castles, and so forth abound throughout the landscape.

On the blockchain, The Six Dragons allow you to manufacture weapons, things, equipment, and more. You can buy, sell, or trade these with other players at any time. The game creates a decentralized economy with real-world value in this way. It's not simply about the play-to-earn system: Governance NFTs were added to the game late last year by the devs. Players have voting power through governance NFTs, and each NFT counts as one vote.

9 Lives Arena is a competitive MMORPG (massively-multiplayer online role-playing game) that will be released on the Enjin blockchain in the near future. TouchHour, an independent studio, created the fantasy PvP combat game for PC and consoles. It does, however, use play-to-earn methods, as do many other NFT games on the Enjin network.

Characters in 9 Lives Arena do not have fixed classes. This means you may design your character any way you like, including manufacturing weapons and armor and selecting spells and abilities. Furthermore, you have the option of selecting a character from a particular bloodline that best meets your needs. Viking, Barbarian, Samurai, Gladiator, or Ancient Atlantean are some of the 'warrior lineages.'

On the Polygon blockchain, Neon District is a free-to-play cyberpunk RPG. It's also a combination role-playing and asset-collection game set in a futuristic, tech noir environment. A party of people, equipment, and other NFT assets advance through many phases of interesting game-play in this third-person shooter.

Neon District is the company's flagship title. It's a group of game developers, artists, and innovators who value diversity, experimentation, and innovation as a core value.

PolkaWar is a blockchain-based decentralized fighting game platform. PolkaWar will develop a dynamic fighting game universe based on the NFT sector. Players will create character systems with varying degrees of weaponry and equipment in order to engage in combat with other players, complete missions, and purchase and sell stuff in the game's marketplace.

TinyHero is an operation that showcases the P2E NFT Game's key features. Tiny Hero is said to gain MATIC from the ecosystem and can be used to play in-game. The TinyHero clone script allows you to play a tower defense game in which you must defend your treasure from the heroes.

Each player will form a team of three characters from the heroes they own during a match, and the match will award them experience (XP) and TINY. Once they have acquired enough XP, players will be able to upgrade their characters to higher levels.

The Cryptozoon clone script is a source code for creating your own NFT auction marketplace similar to Cryptozoon, where you can try out digital gaming platforms. Players can use play-to-earn to gain control over their assets and increase their value through breeding creatures, unlocking enhancements, purchasing products, and more. By contributing in the in-game economy, players add value to both the community and the developers.

The play-to-earn reward system is straightforward, with in-game assets like tools and armament as well as monetary awards like crypto and tokenizable assets that can be traded as non-fungible tokens available (NFTs).

In CryptoDrakeBall, the DrakeBall token (DBALL) is the in-game currency. By killing villains and training with your pals, you can win DBALL tokens. Collect powerful drake claws to boost your strength and sell them on the market for a profit. You can also unlock these skills by training your characters and battling against other players. The game is not yet playable, but it is being worked on.
DBALL is now only available for purchase on its official website for $0,33 per token. The script is still in phase one, which involves character and market design. However, if you believe this game has a future, you should load DBALL tokens!

Axie Infinity and The Sandbox, for example, are popular play-to-earn games. They are linked by a complicated economic framework and classic games. Axie Infinity, a Pokémon-style game produced by Vietnamese company Sky Mavis, is a trailblazer in this direction. It has almost 1 million daily active users. The game's main hooks are charming furry animals known as Axies. Users can breed them, buy and train them, use them to fulfill tasks, and fight with them. The objective is to obtain little love potions (SLP). Players can use SLP to develop new Axies and gain extra advantages.

Our Axie Infinity Alternative game scripts are extremely adaptable and configurable, allowing you to tailor them to your own desired business needs. You can even create your own NFT Gaming platform, similar to Axie Infinity.

We, at BlockchainAppsDeveloper, a top performer in NFT Game Development, create and develop NFT Games on a variety of blockchains, including Ethereum, TRON, Binance Smart Chain (BSC), Polygon, Polkadot, and others...